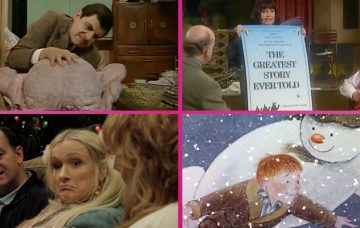 Take a stroll down our festive memory lane

On Christmas Day, millions of families will settle down together, with a tipple or two, to digest the turkey, sprouts and pigs in blankets and enjoy the delights of this year’s festive TV.

It might not quite be on the scale of days gone by, but it’s still the highlight for many of us.

So we thought we’d count down our top 10 all-time favourite Christmas television.

With only 10 on the list, we’ve obviously had to make some pretty tough decisions about which ones to leave out.

Sadly, there is no place for Downton Abbey, Call The Midwife or the classic Morecambe & Wise shows which really set the bar for everything that followed.

We also couldn’t quite squeeze in Mrs Brown’s Boys with the matriarch’s annual tribulations with mechanical Christmas trees, The Simpsons, EastEnders’ Dirty Den handing Angie Watts her divorce papers or any of the Doctor Who festive specials.

So, without further ado, pour yourself a sherry, grab a mince pie and enjoy this stroll through the TV of Christmas past.

Ever since Channel 4 aired this dialogue-free, half-hour animation in 1982, it has become a staple at Christmastime.

It later spawned a sequel, The Snowman and the Snowdog. The original is of course best remembered for the choral classic Walking in the Air.

And as we all know by now, Aled Jones isn’t the kid singing. It’s a St Paul’s choirboy named Peter Auty.

This is the first of two appearances by Rowan Atkinson in this countdown, appearing as Ebenezer Blackadder, the nicest man in all of Victorian England, in a Charles Dickens parody.

Robbie Coltrane’s Spirit of Christmas takes him on the traditional journey through time, only for it to backfire and Ebenezer to realise he could be all-powerful if he wasn’t so generous and selfless.

8) Only Fools and Horses

The most cherished Christmas episode has to be Time on our Hands, where Del and Rodney finally become millionaires.

The scene where Delboy faints on hearing the starting value of their priceless watch at auction is worth it in itself.

In Merry Christmas Mr Bean, he hilariously fiddles with a model Nativity scene and gets his head stuck in a huge raw turkey. Of course he does!

Right from the opening, when James Corden’s Smithy sings along to Do They Know It’s Christmas while berating fellow drivers from behind the wheel, we know we’re onto a winner.

The regular series were warm enough themselves. This festive special just added that lovely hit of spice. It really is lovely.

They only ever made one Christmas episode, but they hit the jackpot with it.

Ted leading a group of priests out of a lingerie department after they got lost in the embarrassing section is up there with the greatest TV moments ever.

4) The Vicar of Dibley

The Christmas Lunch Incident wasn’t its only festive special, but it’s the original and still the best.

Dawn French’s Geraldine finds herself having to stuff down three full Christmas dinners because she’s simply too polite to turn down any of the invites from parishioners.

The two-part Christmas special was the perfect way to end the show.

Ricky Gervais is at his best as David Brent, who gets his own happy ending, but the finale belongs to Dawn and Tim, who finally get together, something fans had been longing for all along.

Read more: The 10 best Christmas films on Netflix to binge on

The 1999 Christmas special was the pinnacle of bittersweet comedy.

There couldn’t have been a dry eye in Britain as a tearful Jim helped daughter Denise delivery her baby in the bathroom. Simply outstanding in every way.

Who would have thought that a hapless Plasticine inventor and his canine sidekick would capture the hearts of a nation?

But a combination of The Wrong Trousers (sequel to the earlier A Grand Day Out), A Close Shave and A Matter of Loaf and Death have given this pair “national treasures” status. More cheese, Gromit?!

Is your favourite on the list? Did we miss it out? Do you agree or disagree? Leave us a comment on our Facebook page @EntertainmentDailyFix and let us know what you think!