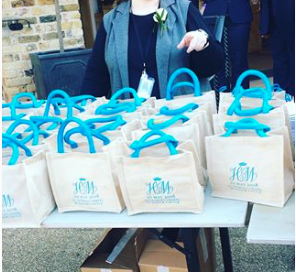 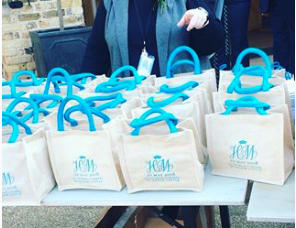 What was in those Royal Wedding goodie bags?

And they've already on sale on eBay!

Cute Royal wedding goodie bags were handed out to a lucky few charity workers and volunteers invited to the grounds of Windsor Castle during the Royal wedding, and already they are for sale on the internet.

The canvas bags embossed with the initials H and M in blue writing and the date of their fairytale wedding were handed out to community ‘champions’ during the royal event yesterday.

Piers Morgan’s journalist wife, Celia Walden, who was a guest on ITV’s coverage, shared a shot of the bags all lined up.

And while most will undoubtedly cherish the money-can’t-buy keepsake, some quickly decided enough money probably could buy it after all.

The goodie bags contained a wedding programme, a chocolate coin, a tin of shortbread, a fridge magnet, a bottle of Windsor Castle water and 20 per cent off voucher for Windsor Castle’s shop.

They were handed out to charity workers, local volunteers, community stalwarts and people who had made their cities, towns or villages a better place.

Anyone lucky enough to be inside the castle gets a goodie bag on arrival – and can have a bacon butty 🇬🇧 #RoyalWedding pic.twitter.com/PnRJieBMXa

They were allowed to stay in the grounds of Windsor Castle to see the wedding guests arriving and given a tour in a buggy, following the same route the new Duke and Duchess had travelled to make their vows.

One recipient shared his joy on social media…

A lovely touch for the guests in the Castle for todays’s #RoyalWedding, complete with water and a huge Harry and Meghan chocolate coin. pic.twitter.com/lODWk7fN3o

But once home, a small number of others took to their eBay accounts to start bidding wars for anyone who wants to get their hands on one.

At least four are currently for sale, and with another six days left to bid the price had reached over £200, but will undoubtedly rise significantly by the time bids close.

Are you shocked people would try to sell their gift?