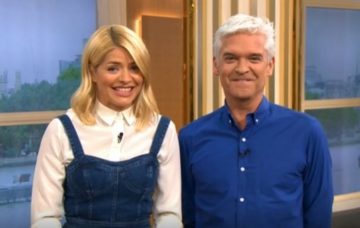 Phillip Schofield reveals what he and Holly Willoughby get up to off-camera!

The presenters are partial to cocktails!

They spend their working week side by side presenting This Morning so you’d think Holly Willoughby and Phillip Schofield would have had enough of one another by the weekend.

But in an interview with Heat magazine, Phil, 56, has confirmed he hangs out with 37-year-old Holly “quite a bit” outside work.

The pair even go to the same place on holiday when they take an extended break from the ITV show over the summer!

Phil said: “We both go to Portugal with our families in the summer holidays. We don’t go on holiday together but we are in the same place so we’ll text and say, ‘Do you want to come out for dinner tonight?'”

He added they also see one another socially in the UK “quite a lot” too – where they like to get drunk and put the world to rights over cocktails.

“Occasionally we do lunch where we forget about telly and talk about life. We blow off steam occasionally, find somewhere that does nice Margaritas and get proper [bleep]-faced,” Phil confessed.

It’s not the first time The Cube presenter has spoken of his close bond with mother-of-three Holly.

“I think that if you watch This Morning on a regular basis then you get an insight into our friendship, which is the same on screen as off,” he once told the Radio Times.

He added that their families regularly socialise as his wife Stephanie Lowe and Holly’s husband Dan Baldwin also get along.

Holly, who is mum to Harry, nine, Belle, seven, and three-year-old Chester, previously told the Daily Star she often turns to Phil for advice about parenting.

“Phil is a brilliant friend and, more importantly, when it comes to parenting advice, he has been there, seen it and done it with his daughters.

“So he’s a constant and invaluable source of advice when it comes to bringing up my children,” she said.

Holly and Phil started working together in 2005 co-hosting Dancing On Ice. They got on so well, when Phil was approached about presenting This Morning in 2009, there was only one co-presenter he wanted – and the rest is history!

Both say they couldn’t imagine presenting This Morning without the other.

When the question was posed to Phil at the recent This Morning Live event in Birmingham, he said: “It wouldn’t feel right [to host without Holly]. We think the same way, we work the same way, and our sense of humour works at the same speed – we laugh at the same things.

“So no, it just wouldn’t be the same. It’s like doing the show with my best friend and younger sister.”

Holly agreed. She said: “I just don’t think it would work. I mean, Phil and I are very lucky that not only do we work together but we have a friendship that ultimately everything else is pinned on.

“I can’t imagine doing it with anyone else ever, it would feel wrong. We’re very lucky to be together.”

Do you enjoy watching Holly and Phil on This Morning? Leave us a comment on our Facebook page @EntertainmentDailyFix and let us know what you think!