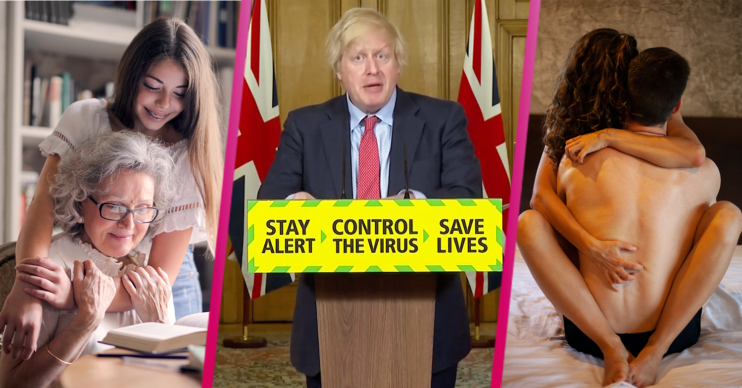 It's a little confusing, to say the least…

Prime Minister Boris Johnson has offered a lifeline to Brits desperate to see their families with the announcement of the new coronavirus “support bubbles”.

The bubbles mean grandparents can hug their grandchildren for the first time since March.

However, as with most of the measures to ease lockdown, there are restrictions.

And some awkward conversations might just have to take place.

What did Boris announce?

The PM issued an update on the easing of lockdown at the Downing Street briefing last night (June 10).

He said: “There are too many people, particularly those who live by themselves, who are lonely and struggling with being unable to see friends and family.”

The PM added: “From this weekend, we will allow single adult households, living alone, or single parents with children under 18, to form a support bubble with one other household.”

Boris went on to explain they will be able to hug, go into each other’s homes and even stay overnight.

There are too many people, particularly those who live by themselves, who are lonely and struggling with being unable to see friends and family.

They won’t have to stay 2m apart and can act as if they live in the same home.

He added that they don’t have to move in together but can if they wish. They’re also allowed to travel between each other’s homes.

Single people means anyone who lives alone. However, it also includes single parents with any number of children under the age of 18 who live at home.

What does it mean for grandparents?

Single people will have to pick just one household to visit. This could mean making a heartbreaking choice of which children or grandchildren to see.

“Grandparents who are living together, they can’t as there’s two of them. But if there’s one of them, they can go and visit their grandchildren,” he said.

He added: “But if they have other grandchildren elsewhere, they can only choose one.”

What does it mean for couples living apart?

Dr Hilary also had advice for those who have been sticking to the lockdown rules and missing intimacy.

Read more: Woman slammed for putting mayonnaise on her fry up

He said: “Couples who’ve been living apart can go and have sex in their support bubbles.”

The announcement came after the government made having sex inside your own home with someone you don’t live with illegal.

Couples are now allowed to meet up and have sex indoors and stay the night.

The only condition is that one person must live alone.

People who are shielding have been banned from forming support bubbles with others if they are clinically extremely vulnerable.

However, Boris said: “I know how hard it is for those of you who are shielding and we will say more next week for the arrangements that will be in place for you beyond the end of June.”

Watching a section on @BBCBreakfast explaining support bubbles. I thought I understood before it started and now I’m more confused than ever.

Very confused by support bubbles coz am sure Chris Witty changed what Johnson had said at the beginning. Can anyone tell me in simple terms please?!

i’m so confused last week they were saying it’s illegal to have sex in ur house and now it’s support bubbles ?? don’t kill me

The rules will only apply in England from Saturday (June 13).

If any member of the support bubble develops COVID-19 symptoms, all members of the bubble will have to self-isolate for 14 days.

The new support bubbles policy is entirely separate to the rules which allows people in groups of six to meet up outside their home.

Boris reiterated: “It is not designed for people who don’t qualify to start meeting inside other people’s homes as that remains against the law.”