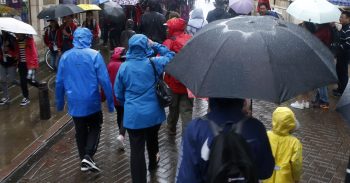 Stormy conditions are sweeping in

The sunny Easter weather is officially over as Britain is due a bout of thunderstorms, heavy rain and even hail.

The warm and sunny stint is being replaced by some miserable April showers, according to the Met Office.

Stormy weather is set to come in from today, bringing with it gale force winds and even flooding in some areas.

Thunderstorms and downpours will be sweeping across northern and central England as of this week.

Met Office meteorologist Mark Wilson said: “There will be a massive change in the weather this week as we see a breakdown from the south with heavy showers spreading northwards through Wednesday.

“We are expecting thunderstorms to develop with the risk of significant rainfall, hail and gusty winds and the potential for quite a lot of rainfall in parts.

“The atmosphere has become very unstable after the recent warm weather and this is enough to spark heavy showers and thunder.”

The bank holiday brought a welcome influx of warm weather, with highs of 25C, but temperatures are now going to plummet to less than half of that, according to forecasters.

Temperatures are set to drop to as low as 11C in some parts of the country.

It warned there could be “possible damage to a few buildings and structures from lightning strikes. Some short term loss of power and other services is likely, with possible delays to train services.”

The Met Office also stated: “There is a good chance that driving conditions will be affected by spray, standing water and/or hail, leading to longer journey times by car and bus.

“Flooding of a few homes and businesses is possible.”