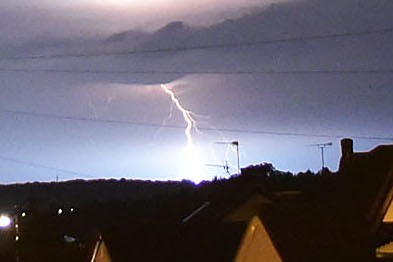 Weather: Storms and heavy downpours due before heatwave sweeps in

Heavy rain and thunderstorms are sweeping Britain ahead of a boiling heatwave.

Today (July 19), the Met Office issued a yellow weather warning in Wales, with continuing downpours and storms expected in other parts of the UK, too.

Heavy showers are due in the north, northwest, northeast, east, central, south and southwest England today.

Thunder and lightning could also be present in south Wales and north and central England.

RAC spokesman Rod Dennis said: “The fine weather is about to take an unwelcome break for some just as thousands of families take to the car to head off on holiday.

“Drivers are going to have to take particular care and could have not just queues of traffic but also heavy rain and gusty winds to contend with, at least at the start of the weekend.”

More thunderstorms and rainfall to be expected on Saturday (July 20), however there should be quite a change in the weather by Sunday (July 21).

It is expected to turn brighter and dry on Sunday and a summer heatwave is predicted in the southeast.

Warm temperatures are predicted to creep in, with highs of 31C. Temperatures may reach up to 21C in the Manchester area, with the lowest temperatures being around 12C in parts of Scotland.

The warm weather should then continue as the Met Office has predicted sunny spells, with highs of 27C on Monday and 31C on Tuesday.

Deputy Chief Meteorologist Dan Harris said: “As we head into next week we are expecting some parts of the country to see some very warm weather, which could reach heatwave thresholds.”

He added: “However, in the cloudier, windier and wetter parts of the north-west temperatures will be nearer normal despite high humidity.”

The Met Office predict it will stay dry and warm across England and Wales early next week, but it will become wet and windy in the northwest.