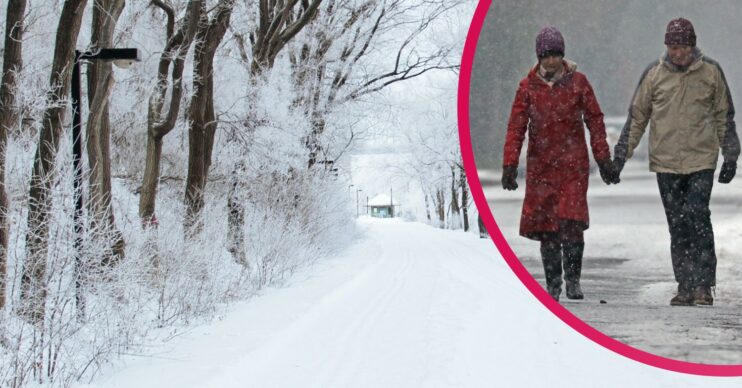 Weather forecast: Snow heading to the UK with temperatures plummeting to -7 in some areas

Headed for coldest November on record

Snow could be on the way to the UK next week as temperatures fall across the country, weather forecasters predict.

Reportedly a three-day flurry will move in from today (Sunday November 14).

Furthermore, it is claimed that as much as 2.5cm of snow could fall each day.

When will it snow in the UK?

Although the weather conditions will be ‘moving in’ imminently, it seems that snowflakes won’t fall until later in the week.

Referring to WXCharts, the 72-hour flurry of snow could blanket the country from November 21.

Scotland is expected to experience the heaviest snowfall. And weather experts forecast a 40 per cent chance of snow in the north of England.

East Anglia, Wales and the south of the England are also expected to see snowy conditions.

AccuWeather senior meteorologist Tyler Ros told the Express: “The threat for snow between November 17-22 looks to be around normal for the time of the year, which is any accumulating snow is likely to occur in the higher elevations of northern England and Scotland.”

Additionally, it looks set to get bitterly cold in the second half of November.

Reports indicate temperatures could fall to between -7C and -11C around the time the snow falls.

Things are about to get even colder.

And bookies reckon 2021 could see the coldest November on record, with Ladbrokes cutting odds from 7/4 to 6/4.

Spokesperson Alex Apati said: “Things are about to get even colder, so much so that we could now be in for a record-breaking month on the weather front.”

Weather for Sunday and Monday

But high pressure doesn’t mean wall to wall sunshine! The south will often be cloudy and with light winds there is a risk of some dense morning fog 🌫️ pic.twitter.com/w9iE9QPYB7

The BBC believes rain is expected to appear in Scotland and norther Ireland, and mist and fog may develop elsewhere.

It will also be a misty morning on Monday in the south of England but later on with be mostly dry.

Read more: Meghan Markle’s sister Samantha speaking to lawyers as she ‘is set to sue Duchess of Sussex’

There might be patches of rain showing up in the north of England and Wales and cloudy spells in other parts of the UK.