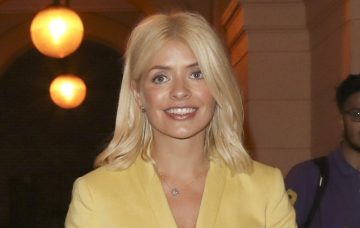 Holly Willoughby has stuck to her word – and donned her very own bridal gown in honour of the Royal Wedding!

This Morning presenter Holly, 37, revealed on Friday that she would be wearing her wedding dress to mark both Prince Harry and Meghan Markle’s big day and, most importantly, her sister’s birthday.

Appearing at This Morning Live in Birmingham, Holly told Alison Hammond: “This week on the old family Whatsapp group that we all have, my sister Kelly said, ‘I’ve got an amazing idea – for anyone that’s been married – go and get your wedding dress and wear it to the party.'”

Taking to Instagram, Holly shared a stunning shot of herself, Kelly and their mum – ALL in their wedding dresses.

The trio are stood in a sunny garden in the snap, underneath a giant red, white and blue balloon arch.

Holly and Kelly are clutching Union Jacks, while their glamorous mum Lynne is proudly posing in the middle of her daughters.

Holly told her followers: “So it’s the Royal wedding, my sisters 40th and my mums 70th birthday party at the willoughby residence today!!!! …

“I blame you @ladywilloughby for the dress code!!!! #whynot #happiness #love.”

When revealing her plans, Holly had joked that she would be looking like Miss Havisham, from the Charles Dickens novel Great Expectations.

“I dug [my dress] out – I took it into This Morning to the big steamer as I haven’t got one of those,” she explained.

“It is filthy! I haven’t had it dried cleaned. It’s a bit ripped.”

Um, no. You definitely don’t look like Miss Havisham, Holls!

They have three children together Harry, eight, Belle, seven, and three-year-old Chester.