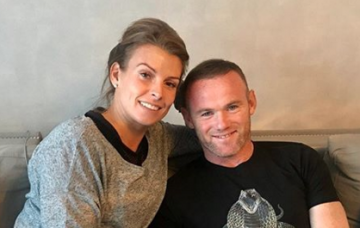 But the family could have a tough decision to make...

Over the past year or so, the good ship Rooney has had to navigate some pretty stormy waters.

After Wayne was arrested for drink-driving back in September while travelling with a woman who WASN’T his wife Coleen, there were worries that one of the most famous marriages in showbusiness might come unstuck.

However, Wayne and Coleen appear to have been patching up their differences in recent months, and now Wayne has given the biggest clue yet that the couple are back on track.

The former England footballer has shared a rare picture of his family – all five of them – with his fans on Instagram. And it has to be said, they all look very happy!

None more so than Wayne, who captioned the shot with two emojis – a camera and a smiley face.

The footy star’s followers seemed pretty chuffed about the snap, too. One fan paid the compliment: “Very cute family x.”

And a third fan quipped: “He’s making his own team!”

Read more: Coleen and Wayne Rooney enjoy a day at the races

The picture has already been liked more than 330,000 times.

However, the family (maybe not the younger ones so much) could have some tough decisions ahead as Wayne reportedly ponders whether to move to a club in the US or stay with his current team, Everton.

But it remains to be seen whether Coleen will want to relocate to another country with four young kids in tow.

At least she and Wayne seem to be pals again, following their recent problems.

Earlier this month, the 32-year-old mum seemed to prove that as she shared a picture of the two of them having a day out at Chester races.

Do you think the Rooneys should move to the States or stay in the UK? Let us know on our Facebook page @EntertainmentDailyFix!