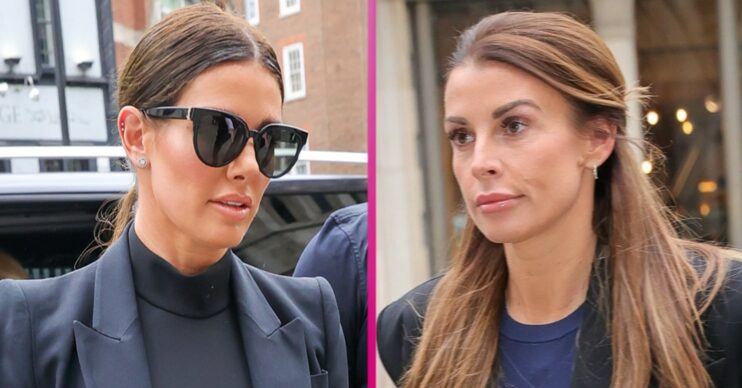 Wagatha Christie trial: Every bitter blow to Rebekah Vardy and Coleen Rooney during week one

It's been a rollercoaster week for the WAGs in court

The pair are currently at war after Coleen, 36, accused Rebekah, 40, of leaking ‘false stories’ about her private life to the media.

But, over two years since the shock tweet, the WAGs are looking to settle their feud for good.

From a missing phone to a nasty rumour about Peter Andre’s manhood, here’s a rundown of the biggest blows from week one.

The trial started on a dramatic note as Coleen’s barrister David Sherborne quizzed Rebekah over a past comment she made about Peter Andre.

During a 2004 interview with the News Of The World newspaper, she compared Peter’s manhood to a “small chipolata”.

When asked about the comment in court, Rebekah admitted it was something she “deeply regrets”.

She told the court: “It is something that I deeply regret.

“It is not nice to read and I understand why this is being used and to me this is mudslinging and I was also threatened with mudslinging by Mrs Rooney’s team.”

Peter later addressed the comment on social media. Find out what he said below:

Rebekah admits to leaking information during the Wagatha Christie trial

During yesterday’s hearing (May 12th), Rebekah admitted she plotted to leak information about Danny Drinkwater.

It came after the footballer was arrested for drink-driving in 2019.

However, Jamie Vardy’s wife told the High Court the attempt to leak the story was a one-off.

Despite this, Rebekah has denied being the leak behind a string of other stories.

These include one about former Leicester City player Riyad Mahrez, as well as an unnamed celebrity allegedly cheating on her husband with a footballer.

‘Who is Davy Jones?’

Rebekah appeared to confuse ‘Davy Jones’ with a real person during an embarrassing moment on day three.

At the time, Mr Sherborne was quizzing the WAG over her agent, Caroline Watt, losing her phone in the North Sea.

“We know that Ms Watt’s phone is now in Davy Jones’ Locker, don’t we, Mrs Vardy?” the barrister said.

Rebekah then replied: “I’m sorry, I don’t know who Davy Jones is.”

According to reporters, the court erupted into laughter as the judge was forced to explain the nautical reference.

It certainly hasn’t been easy for the mum-of-five on the witness stand.

During day four of the trial, Rebekah broke down as she discussed the strain the case has had on her.

Asked how she has found giving evidence this week, she responded: “Exhausting, intimidating, I feel like I’ve been bullied and manipulated.”

I was going to lose the baby.

The WAG also appeared teary as she spoke about the “constant anxiety” and”panic attacks” ahead of welcoming her daughter.

“I was going to lose the baby,” she claimed.

According to Rebekah, she was subjected to “abuse and threats of a really horrific nature”, as well as being “jeered and heckled” at football matches.

What has Coleen said?

While Rebekah has dealt many blows over the past few days, Coleen finally had her time on the stand today.

On Friday (May 13), the mum-of-four appeared in the witness box for the first time on day four of the trial.

She explained how she had attempted to stop the case going to trial, however Rebekah was having none of it.

“I have sought to resolve this matter amicably on various occasions because I was of the view that the time, money, resources and efforts involved could be better spent elsewhere, particularly in light of the Covid-19 pandemic,” Col stated.

This was my last resort.

“However, the efforts I made in May 2020, prior to proceedings being issued, in October 2020, after I had filed my defence, and in January 2021, during a stay in the proceedings, were all in vain.”

She also admitted to being “surprised” over her tweet receiving so much attention.

Speaking about the abuse Rebekah has received, the WAG said: “It’s not in my nature to cause abuse or trolling in any way at all.”

In fact, Coleen went on to explain that her tweet was the “last resort” when it came to outing Rebekah.

However, earlier on in the week, Rebekah’s lawyers suggested Coleen “revelled” over her “Wagatha Christie” nickname.

Rebekah’s barrister, Mr Tomlinson QC, told the court: “The fact someone has an account doesn’t mean they are the only person who accessed it. Mrs Rooney was then dubbed ‘Wagatha Christie’ – something that she appears to have revelled in.

“She copied in her mobile phone, we recently discovered, the little photographs people had done making her up as Agatha Christie and so on.”