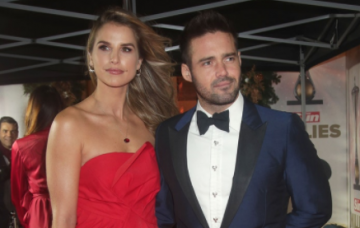 The first official photograph from Vogue Williams and Spencer Matthews’ wedding has been revealed.

The newlyweds’ magical Scottish ceremony was covered exclusively by Hello! magazine, which features the happy couple on its new cover.

The model and television presenter – who is due to give birth any day now – chose a bespoke Paul Costello gown with long sleeves and a plunging neckline.

Vogue and Spencer wed at the Matthews family estate in Scotland surrounded by loved ones including his brother James and James’ wife Pippa, who is the Duchess of Cambridge’s sister.

Pippa and Kate’s brother James was among those who gave a reading.

Spencer admitted it took a while for the “wonderful but dreamlike” wedding to sink in, but now he feels “married, settled, and happy.”

He added: “Everything has fallen into place. As we’ve said before we are best friends, we love being together, so it does feel just perfect. We’re delighted. I can’t imagine life without Vogue at this point. People say, what’s changed? What’s different? But it’s just part of growing up, meeting your soul mate and moving on with life.”

Pick up this week’s Hello! magazine, out now, for the full wedding exclusive

They kept their romance under wraps at first before confirming a couple of months after meeting they were an item.

Spencer popped the question to Vogue in January while they attended a production of The Lion King musical together in London.

Spencer designed the ring himself, previously telling Hello: “Vogue is fascinated by bridges and architecture so I designed it to look like a bridge. And it was a slightly confident move, I suppose, engraving the date of the engagement into the ring.”

As well as marrying this year, the couple have something else to celebrate: the birth of their first child!

They are expecting a little boy any day now.

Appearing on ITV’s This Morning last week, Spencer – who is about to star in Celebrity MasterChef – said: “”We are very excited!

“I know it’s bad to say, but I was kind of hoping the first child would be a boy so purely if you have girls afterwards, which we’d very much like to have, I always thought it’s nice to have an older brother.

“We’d like to have at least three in an ideal world.”

Spencer declined to reveal exactly what names he and Vogue were considering for the little boy, but confirmed the tot’s two middle names have already been chosen.

“We do have an idea of names but Vogue has asked me to keep that to ourselves,” he said.

“I’ve spoken a bit before on the show about the Michael Matthews Foundation. One of his middle names will be Michael after my late brother and one will be Frederick after her late father.”

What baby name suggestions do you have for Spencer and Vogue? Leave us a comment on our Facebook page @EntertainmentDailyFix and let us know what you think!