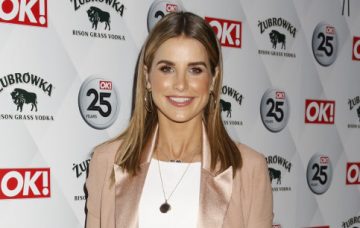 She is seven months pregnant with her first child

The Irish DJ and television presenter is expecting her first child with former I’m A Celebrity and Made In Chelsea star Spencer Matthews.

But it hasn’t all been smooth-sailing.

Taking to Twitter, the 32-year-old said: “I actually just have to laugh at the people fat shaming me. I’m seven months PREGNANT, the online world is a nasty little place.

“Myself and my larger body are very happy and look forward to getting even bigger.”

I actually just have to laugh at the people fat shaming me. I’m seven months PREGNANT, the online world is a nasty little place. Myself and my larger body are very happy and look forward to getting even bigger ☺️

Vogue was inundated with support from fans, including one who wrote: “They must be blind – you are fabulous and you look wonderful with your beautiful bump. Ignore the nasties!!”

Another said: “Vogue all I can say is sorry its a sad sad world we live in, hope u have the healthiest and happiest of pregnancy, xx.”

Storm tweeted: “You look absolutely BEAUTIFUL!!!! Such a stunning mummy-to-be carrying the most gorgeous baby bump. You look better than you ever have babe and your happiness is radiating from the inside out.”

Vogue has also had to contend with critical remarks about her exercise regime.

She’s maintained her healthy lifestyle while pregnant, frequently posting videos of her pregnancy workouts online, after her personal trainer devised a new programme to take account of her pregnancy.

During a recent appearance on ITV’s Lorraine, Vogue said: “A lot of people are against pregnant women working out, I’ve found, which is bizarre. I feel fit and healthy and I want to stay fit and healthy. Obviously you put on weight, I’ve put on quite a good bit of weight but that’s what I’m supposed to do, but I’m happy doing it.”

Vogue also insisted she has no plans to pressure herself into losing weight after giving birth.

“I totally disagree with any sort of crash dieting,” she said.

Vogue, meanwhile, also said she’d been “disappointed” after some unnamed brands shied away from hiring her after the pregnancy news broke.

She said: “I am working with more baby brands, which is fun because your life does change.

“But I was quite disappointed when I was dropped by certain people for being pregnant. I feel like a lot of people think it is [an illness] and I won’t be able to do this or that, but you can do as much as you can.

“You do get tired later on, but you’re certainly no different, really. I don’t feel very different now, apart from the fact that I go to bed at 8pm every night!”

They became engaged in January, when Spencer popped the question on stage at West End show The Lion King, then announced shortly afterwards a baby was on the way.

The couple have confirmed the baby will be a boy.

Did you ever experience any critical remarks while pregnant? Leave us a comment on our Facebook page @EntertainmentDailyFix and let us know what you think!