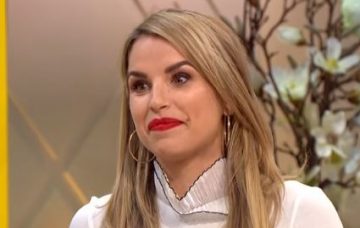 Vogue Williams has revealed her “disappointment” over some reactions to her pregnancy.

The Irish television and presenter is currently six months pregnant with her and fiancé Spencer Matthews’ first child.

Appearing on ITV’s Lorraine on Tuesday, she claimed some brands had dropped her after the baby news.

She said: “I am working with more baby brands, which is fun because your life does change.

“But I was quite disappointed when I was dropped by certain people for being pregnant. I feel like a lot of people think it is [an illness] and I won’t be able to do this or that, but you can do as much as you can.

“You do get tired later on, but you’re certainly no different, really. I don’t feel very different now, apart from the fact that I go to bed at 8pm every night!

Vogue said she is still DJing and working hard on her travel show and documentaries.

She told Lorraine she’ll work until the beginning of August, then slow down her commitments ahead of the birth.

Vogue also said she’s not putting any pressure on herself to get back to work quickly – or regain her pre-pregnancy body.

“I totally disagree with any sort of crash dieting,” she said.

“A lot of people are against pregnant women working out, I’ve found, which is bizarre. I feel fit and healthy and I want to stay fit and healthy. Obviously you put on weight, I’ve put on quite a good bit of weight but that’s what I’m supposed to do, but I’m happy doing it.

“I’m not going to be in a rush at the end – I’m healthy like that anyway.

“You do see people and you think, how did they do they do that? I’m not going to be one of them anyway.”

Vogue and former Made In Chelsea star Spencer, who met on Channel 4’s The Jump last year, got engaged in January.

The couple announced in March that their first child is on the way, and have since confirmed it will be a boy.

Vogue told Lorraine: “We got pregnant after about a week of trying so we were super lucky. Really lucky, we were like, ‘Whoa!'”