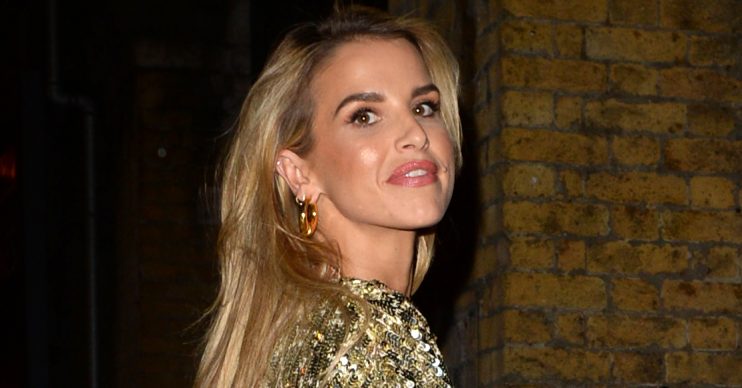 People emailed her pointing out her so-called flaws

She’s currently enjoying an idyllic trip to St Barts with her husband, Made in Chelsea‘s Spencer Matthews, and their adorable son Theodore.

However, it hasn’t all been sunshine and cocktails for model Vogue Williams, who revealed she cried after being body-shamed.

Posting to Instagram, Vogue said she was aware that being photographed while on holiday came with the job.

However, what she didn’t expect was for people to comment on the pictures and actually email them to her, commenting on her cellulite.

The pictures show Vogue – who gave birth 15 months ago – looking sensational in a bikini as she tries her hand at paddle boarding.

She wrote on Instagram: “Today I cried about my body, something I haven’t done in quite some time because I had gotten to a point where I was happy with myself.”

She added: “These pictures were taken when we were at the beach, you can’t stop paps but I get it comes with what we do. What I can’t stand is the hundreds of people commenting and even mailing me about the pictures that show cellulite on the back of my legs.”

Read more: Dancing On Ice pro Matt Evers on the saucy reason he’s had to change lifts with H

Vogue added that she usually lets it go over her head. However, she added that the comments were “so nasty that I allowed it to really get to me”.

What I can’t stand is the hundreds of people commenting and even mailing me about the pictures that show cellulite on the back of my legs.

She revealed: “For a second I forgot how body positive I am, how happy I am in general and stupidly I allowed this to upset me.”

The mum-of-one continued: “I just think that commenting on anyone’s body or appearance is so pointless and low. We are all different, none of us are flawless but that is what actually makes us flawless!”

She also urged her followers to “be kinder to each other”.

Keen to not let the trolls ruin the rest of her festive break, Vogue had one last message to all those who had body-shamed her.

She said: “PS I’m back to loving my bod, cellulite and all.”

During her pregnancy, gorgeous Vogue revealed that she cried three times a day following criticism on social media.