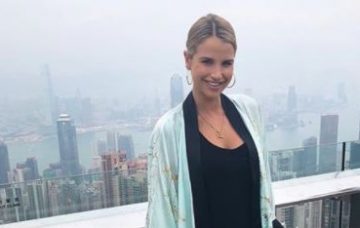 The model and DJ took to Instagram Stories to share her amusement after reading speculation she’d wed Spencer during their recent trip to Greece.

Apparently, the speculation arose because Spencer, 28, captioned a holiday snap: “Last night was magical… We are FAMILY.”

But the magical last night on holiday was NOT a secret wedding!

And his reference to family did NOT mean that he and Vogue were legally joined!

Vogue, 32, told fans: “Last week I read we were planning a jumbo jet to transport our guests to a Coachella-themed wedding. This week I read we got married on our four-day trip to Greece.

“I wonder what we’ll be doing next week!!”

Vogue and Spencer are pretty busy these days, so if they had pulled off a secret wedding abroad it would have been pretty impressive!

They’re expecting their first child together later in the year, while Vogue has just been in Hong Kong filming a new travel TV show.

The couple, who met on Channel 4’s The Jump last year, got engaged in January.

Spencer popped the question on stage at The Lion King show in London, much to Vogue’s complete shock!

In an interview with Hello magazine, Vogue said: “I don’t think we’ll get married until next year, and I love being engaged. We’re slowly but surely starting wedding prep. We’re going to see the venue hopefully next month.”

Spencer added: “But we’re in no rush to sit down and plan, plan, plan.”

The couple announced in March that their first child is on the way.

And Vogue appeared to let slip during a TV interview earlier this month that it’s a baby boy!

What sort of wedding did you have? Leave us a comment on our Facebook page @EntertainmentDailyFix and let us know!