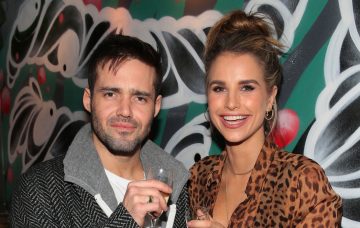 They shared the happy news with beautiful pictures

Vogue Williams and Spencer Matthews have announced the arrival of their first child.

Model and DJ Vogue, 32, took to Instagram to reveal she gave birth to a “beautiful and healthy” baby boy on Wednesday morning.

She posted a photo of her fingers resting on his tiny feet.

Her accompanying caption read: “This morning at 3:55am, we welcomed our son into a quiet London hospital… He is beautiful and healthy. We feel truly blessed.”

Vogue did not confirm the little boy’s name.

Fans rushed to congratulate Vogue, who revealed two days ago she was overdue and starting to get “slightly grumpy” as she waited for the new arrival.

Vogue had posted a photo with husband Spencer on Monday, saying: “This boy has been amazing… overdue means a slightly grumpy wife who tends to fall asleep quite a few times a day!

“He’s keeping me happy and being a great support…you’re the best.”

Former Made In Chelsea star Spencer, 29, also confirmed the little boy’s arrival over on his own Instagram page, posting the same caption as Vogue but a different picture.

This morning at 3:55am, we welcomed our son into a quiet London hospital… He is beautiful and healthy. We feel truly blessed. Couldn’t be more proud of @voguewilliams ❤️

He added: “Couldn’t be more proud of Vogue.”

Spencer and Vogue met while co-starring on Channel 4’s extreme winter sports show The Jump in 2017 and became engaged in January when Spencer popped the question on stage at a production of The Lion King in the West End.

They announced their pregnancy just a few weeks later and married in June.

They initially kept their child’s sex a secret before Vogue let slip on Irish TV she was expecting a baby boy!

Appearing on ITV’s This Morning last month, Spencer had said: “I know it’s bad to say, but I was kind of hoping the first child would be a boy so purely if you have girls afterwards, which we’d very much like to have, I always thought it’s nice to have an older brother.

“We’d like to have at least three in an ideal world.”

“One of his middle names will be Michael after my late brother and one will be Frederick after her late father,” he said.

What baby name suggestions do you have for Spencer and Vogue? Leave us a comment on our Facebook page @EntertainmentDailyFix and let us know what you think!