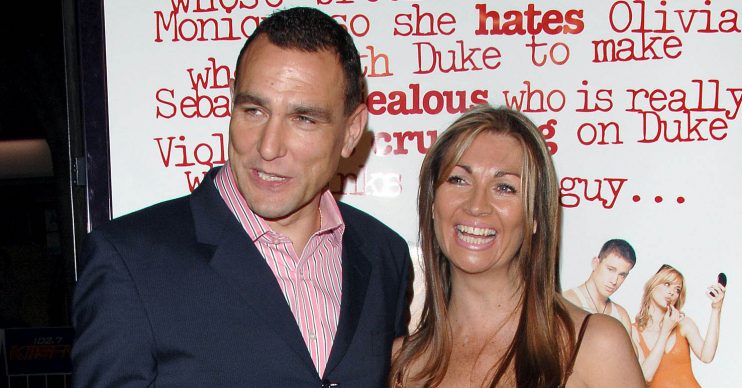 She passed away surrounded by her family

Film star Vinnie Jones has said a final goodbye to his wife Tanya following her death earlier this month.

Tanya passed away aged 53 on July 6 after a long battle with cancer, with a statement sent to The Sun revealing she died “peacefully” at the family home surrounded by Vinnie, their daughter Kaley and other members of the family.

Presenter Lorraine Kelly said on the programme: “Very sad this morning. You have just been to the funeral of Tanya, Vinnie Jones’ wife, of course. Not unexpected, but it’s just so sad, isn’t it?”

Paying tribute to Tanya, Ross said via live link: “So sad. Gone just at the age of 53. A wonderful, courageous woman. You only had to meet Tanya once to feel like you really knew her and she really knew you. She really had a magic about her.

Lorraine said her thoughts are with “everybody who loved her”.

A source told The Sun that Tanya’s condition had worsened over the past few weeks.

Tanya, who married Vinnie in 1994, had faced a string of health problems in previous years.

She had to undergo an emergency heart transplant in 1987 following the birth of her daughter, and is understood to have suffered from cervical cancer twice previously.

Speaking to The Guardian in 2012, Vinnie said: “We’ve tried to live a normal life, and sometimes if we overdo it we think, ooh, we’ve got to steady up.

“But we don’t wrap her up in cotton wool. We haven’t got time to think about ‘what if’ and ‘what about’.

“We make the most of life. We’ve been through a lot, so I just want her to enjoy life and for us to grow old together.”

The year following, both Vinnie and Tanya were diagnosed with melanoma, a form of skin cancer.

Earlier this week, Vinnie reportedly returned to work on the upcoming celebrity version of the X Factor.

A source quoted by The Sun said that show bosses had expected him to say he “wouldn’t be involved any more” after Tanya’s death, but the star “made it clear” he wants to continue with the project.

Producers reportedly gave the former Celebrity Big Brother contestant the option of delaying his work on the new show for “as long as he wants” but the dad of two is “keen to plough on”.