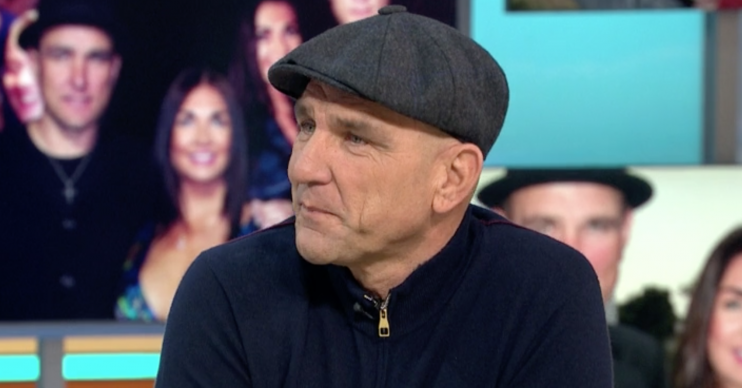 Former football hardman Vinnie Jones has waded into the “War of the WAGS” during an appearance on Good Morning Britain.

Vinnie was talking to the show’s hosts Piers Morgan and Susanna Reid about the death of his beloved wife Tanya, who passed away in July after a battle with skin cancer.

Comparing his late wife’s behaviour to that of other footballers’ wives Coleen Rooney and Rebekah Vardy, he said the women were an “embarrassment” to their husbands.

Read more: Strictly’s Karen Hauer on her new man and being with someone who “doesn’t try to change her”

And, Vinnie revealed, his beloved wife Tanya carried herself in an entirely different way.

Vinnie said: “You look at the papers now with the two football wives. Tanya got offered hundreds and hundreds of opportunities to do modelling and do stories and she never done none of them.”

Read more: This Morning viewers speechless as man who adopted six-year-old girl discovers she’s actually 22 and wanted to kill him

He added: “She’s the opposite to these girls now.”

During the emotional chat, Vinnie also said that people ask him what he thinks of Coleen and Rebekah and their war of words.

He said: “People say to me: ‘What do you think of these two girls?’ I think it’s quite funny and everything else, but what about the embarrassment to their husbands?”

I think it’s quite funny and everything else, but what about the embarrassment to their husbands?

He added that there was “no thought of their kids”.

She has also reportedly hired a team of forensic IT experts to prove her innocence.

Coleen, meanwhile, headed out on the town after the story hit the headlines, reportedly to celebrate Wes Brown’s birthday with her WAG pals.

Let us know what you think of Vinnie’s comments on our Facebook page @EntertainmentDailyFix.