Will you be doing the same?

It’s no secret that Corrie’s recent dark storylines haven’t been a hit with all the viewers.

Phelan’s murderous campaign on the cobbles has been too gruesome for some viewers to handle, while hard-hitting storylines such as Bethany’s sexual exploitation, and Billy Mayhew’s drug addiction have also attracted criticism.

Viewers still love Corrie – but they don’t want to see all the nasty bits.

And now fans have found a solution to their problems – episodes of the show from 1987!

Since late last year, ITV3 has been showing two old episodes of Corrie every day. It started from 1986 and has now reached 1987 with the escapades of Bet Lynch, Mike Baldwin, and Ken and Deirdre proving a BIG hit.

Fans have been flocking to spread the word about classic Corrie on social media – and comparing it to the doom and gloom seen in the modern show.

“Have been watching the classic Coronation Street on daytime TV,” one viewer wrote on Facebook. “Much prefer this to what we are watching now.”

While another added: “It’s so much better…it has humour and good storylines.” 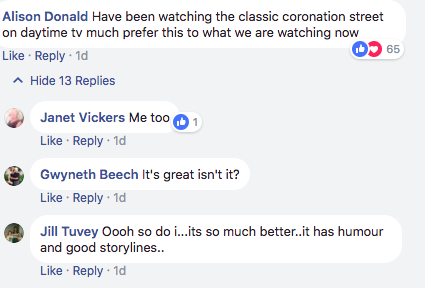 And lots of people have pointed out that the old episodes are far less gruesome than the modern show.

“The good old days on corrie when it was fun and not murderous like todays,” said one fan on Facebook. “No violence on the classic Coronation Street,” said another.

“Just enjoyed classic Corrie – there were no murders every week,” said another viewer on Twitter. But others have spotted some similarities between the show from 30 years ago and today.

“Mike Baldwin is as much of a snake as his son Adam is now,” said one fan.

And others said the show had simply reflected modern life.

“Life in general has changed so much and so the programs have to change to keep up with the present day unfortunately,” said one fan.

“Corrie has moved with the times,” said another. “I enjoy watching Corrie now.”

Do you think classic Corrie is better than the modern show? Leave us a comment on our Facebook page @EntertainmentDailyFix and let us know what you think!