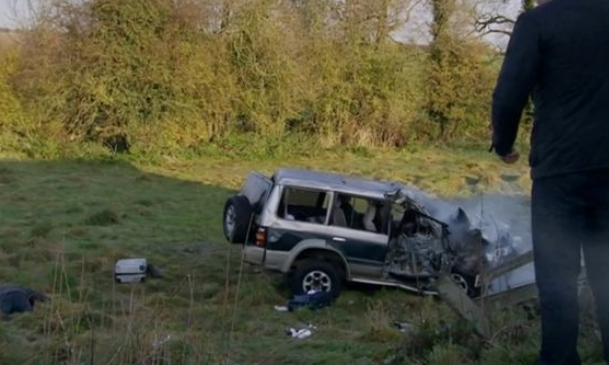 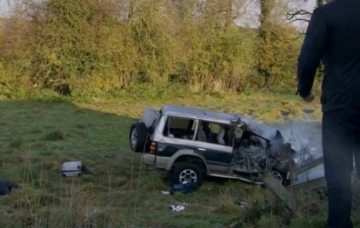 That was some smash

Emmerdale left viewers stunned after airing an epic car crash which wiped out half of the White family, as they gave chase on Robert, who had snatched his son.

And even though the stunt itself was impressive, the thing that left fans most shocked is the fact that it wasn’t an accident.

Lachlan veered the car into the path of a huge lorry ON PURPOSE!

The twisted teen deliberately lunged at the wheel while Chrissie was driving, after discovering his mum was behind girlfriend Belle Dingle dumping him.

Chrissie paid Belle a visit in last night’s episode and revealed to her just how troubled Lachlan is. She then convinced her to call time on their relationship, meaning Lachlan would go to Australia with the rest of the family.

But as Chrissie – and Lawrence – tried to explain her actions to her vengeful son, he delivered the chilling line: “I’m sorry Granddad but we’re not going to Australia,” before grabbing the wheel and steering the car into the path of a HUGE lorry.

Robert looked on in horror as the White’s Land Rover – containing all four family members – was crumpled and sent spinning into a field.

Lawrence was thrown from the vehicle and met a rather undignified end with his face in the mud and his bum facing skywards.

Chrissie initially looked as though she might have a chance of survival, but died in the car just as emergency services were arriving.

Rebecca’s life is hanging in the balance in hospital, with doctors fearing an internal bleed they have not yet managed to locate.

Lachlan somehow escape with cuts, bruises and a sore chest.

As for the poor lorry driver? That’s anyone’s guess!

Viewers were pretty shaken by the dramatic scenes…

Tonight’s #emmerdale had me in tears 💘 the crash was amazing ! Loved it 💘 will miss the whites family 😢❤ #TheWhites @miss_marwood @emmerdale

How hard was that to watch? Two deaths. @emmerdale

Fans were also baffled that Lachlan managed to walk away from the carnage with little more than a few cuts and bruises.

We have a theory – he’s a Terminator.