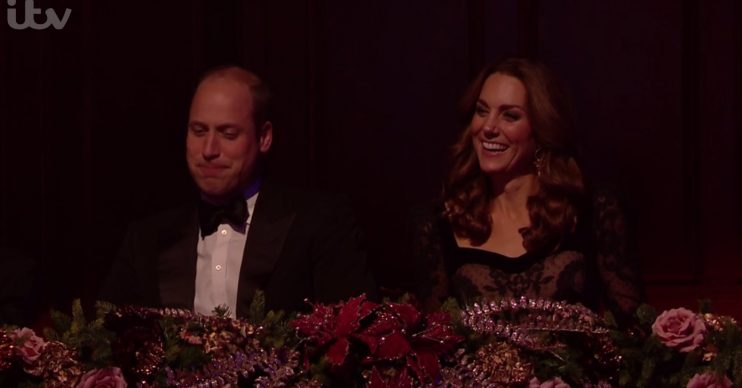 They took the jokes well

But viewers were less than impressed with the pair, who shared ‘painful’ jokes with the audience.

Read more: Duchess Of Cambridge has revealed Prince Louis has started to talk

Romesh joked: “Like me you’re blessed with three kids.

“I imagine every morning they come running into your bedroom and you look at their beautiful faces and say, ‘I regret this’.”

Rob also thanked them for coming to the show.

That’s exciting. You got the babysitter until midnight or 1am? It’s worth that extra 20 quid.

“That’s exciting. You got the babysitter until midnight or 1am? It’s worth that extra 20 quid.”

Earlier, they began their routine with Rob saying that he couldn’t carry on introducing the royal couple because ‘duchess’ sounded too much like something he would shout when he used to work at the market.

He also said: “We are also joined by some special royal guests tonight.

“I’m really excited about the royal party being here. I’ve been doing research. I went to Hampton Court Palace for 10 hours. I got lost in the maze.”

Even though the royal couple took the jokes in good spirits, viewers on Twitter weren’t so kind.

Head to our Facebook page @EntertainmentDailyFix and let us know what you think of Gino’s X-rated chat.