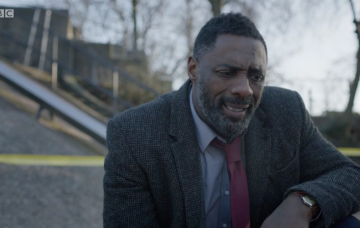 The timeline got a bit confusing in the finale

The latest series of crime drama Luther has shocked and delighted fans in equal measure, but viewers were annoyed during Friday night’s gripping finale episode, when a huge continuity blunder took them out of the story.

Producers were blasted on social media when a scene went from day to night in a matter of minutes, with one labelling the BBC: “abysmal.”

The problem occurred when John, played by Idris Elba, chased down the serial killer, using a torch to search a building with his new partner, DS Halliday (Wunmi Mosaku).

But minutes later he walked out into bright sunshine, confusing everyone.

Viewers flooded Twitter to complain, with one writing: “Chuffing continuity in Luther is abysmal. Glasses filling themselves and he’s in a house for 5 minutes and it’s gone from night to day.”

Another tweeted: “Can anybody tell me why they keep switching from night time to day time willy nilly on #Luther please?”

A third wrote: “Anyone notice how quickly it went from night to day in #Luther?”

While a fourth moaned: “@bbcluther ❤️❤️ Luther but what was with the day to night to day to night continuity in the last scenes?????”

Find out where the nation's newfound fear of night buses comes from. #Luther Series 5 is available to watch on @BBCiPlayer now: https://t.co/d8sGhMJMjw pic.twitter.com/wblVOpIuP4

One more added: “Timeline very confusing in this episode! Night to day in 10 mins?? 🤔 #Luther.”

The hugely popular crime show has divided fans during this tense series.

The BBC has been hit with a sea of complaints over some of the more gruesome scenes, while others moaned that the lighting meant they couldn’t see enough of those moments.

But viewers ultimately loved the four-part series – blunders aside – with fans rushing to Twitter after the finale to write: “#Luther wow, how dark and disturbing the series was but compulsive viewing. Shan’t see #HermioneNorris in same light, always great in any part. #Luther, everyone near him dies! Will he get out of the mess or is it the end?”

Me after catching up on last night's #Luther pic.twitter.com/nONMU9RyEw

Another admitted: “Watched it all in one go last night!! Omg tense …. so good #Luther.”

A third wrote: “Watched series 5 last night, and it didn’t disappoint, Luther is one of the best tv series in my opinion, hope there will be a 6th 🤞🏾…”

One more added: “Finished #Luther last night! SO GOOD but wouldn’t recommend watching it on your own like I did #NoYouSleptWithTheLightOn.”

Read more: Emma Willis pulls out The Voice launch because of illness!

Mistakes aside, we LOVED this series of Luther. Bring on the next.

Did you notice the error? Leave us a comment on our Facebook page @EntertainmentDailyFix and let us know what you think.