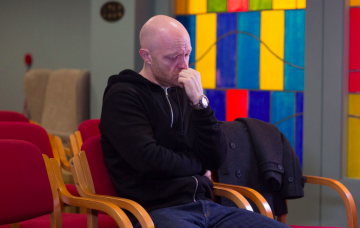 Max Branning’s scheme to get baby Abi in EastEnders might hit the skids soon as viewers have pointed out a massive flaw.

One that doesn’t just end his chances of giving a home to his granddaughter, but one that means he should be in prison.

The car salesman, played by Jake Wood, recently returned to Walford married to Rainie Cross in an attempt to convince social services he’s a decent human being who should adopt his granddaughter.

Viewers know her mum Abi, Max’s daughter, died as she tried to save Max from taking his own life at Christmas.

With Tanya and Lauren Branning nowhere to be seen, baby Abi was abandoned, with Max wanting to take care of her.

However his plan may fall flat as confused viewers are waiting for him to face justice for all of his many crimes.

At Christmas Max was outed as having tried to kill Jane Beale, and for causing Steven Beale’s death in tense scenes.

His ex-wife Tanya returned and exposed him for everything he had done, but this seems to have been forgotten by the other residents in Walford.

Even Ian Beale seems to have forgotten Max had caused Steven’s death by pushing him into a table in the burning restaurant.

One wrote: “I want to know how Max isn’t on an attempted murder charge. Ian’s son Steven and also the attempted murder of Jane. Not one word said about it. Ian’s not [bothered] that he’s walking free.”

Another said: “Max killed Steven and Abi there’s no way he should get baby Abi.”

What do you think of Max’s scheme? Leave us a comment on our Facebook page @EntertainmentDailyFix and let us know what you think!