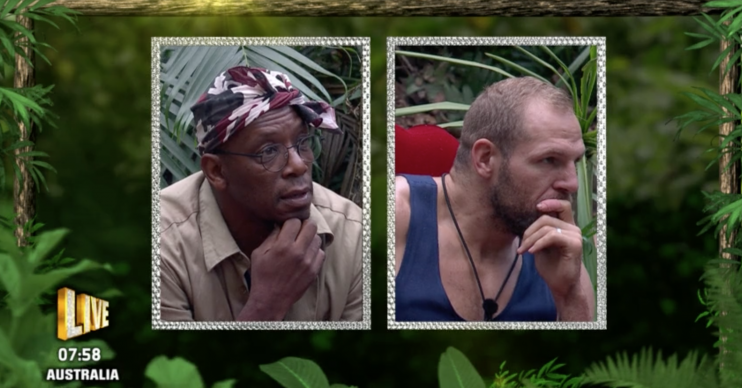 Fans of I’m A Celebrity have slammed this year’s series for becoming the “Ian and James show”.

Venting their anger on Twitter, viewers demanded that campmates other than “moody tw*ts” James Haskell and Ian Wright are given more airtime.

The pair have come under fire for ganging up on Andrew Maxwell, with some saying they have “bullied” him.

James and Ian are bullies. Nothing but bullies #ImACeleb

I do not like Ian or James I think they are aggressive and bitter, Ian more so then James #ImACeleb

Now they’re calling for bosses to force Ian and James to take a back seat and let some of the other jungle stars shine.

“Can’t actually be a***d with the ‘Ian and James’ show any more. Can you both exit quietly. Thanks #ImACeleb,” one viewer said.

Another said: “My god Ian and James need to get off this show ASAP, moody tw*ts.”

Really starting to go off James & Ian. James is so rude every time he opens his mouth and NEVER gives anyone the chance to respond to him and Ian? Well he just needs to grow up and stop sulking constantly. He was napping the other day but that’s allowed I suppose #ImACeleb

Andrew didn’t escape the wrath of the I’m A Celeb fans either, with many calling for him to pipe down, too.

Fans also commented on the fact that the battle of the trio’s “egos” was “exhausting”.

Show less on James, Ian and Andrew please ITV. All the three of them do is moan #ImACeleb

can they show less of the three idiots that are ian, james and andrew and give more airtime to cliff, caitlyn, myles, andy and roman cause they actually deserve it #ImACeleb

The egos in the #imaceleb camp are absolutely ridiculous this year. Can we please stop giving Ian, James and Andrew so much airtime with these petty squabbles it’s exhausting pic.twitter.com/WwcMFguN63

Another said: “Ian and James are both dominating the camp and the atmosphere with their alpha wannabe bullsh*t.”

However, maybe keen to inflict punishment on James and Ian, the pair were voted to take part in Wednesday night’s Deadly Dungeon trial.

Ian is currently third favourite to be eliminated first from the show. His wife Nancy is now in Australia ready to greet him upon his exit.