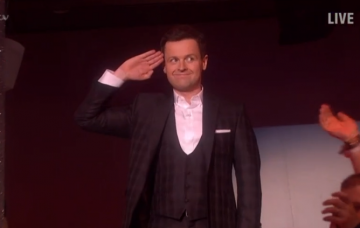 Why no mention of Ant at the head of the show, though?

The studio audience of Saturday Night Takeaway took to their feet to show their support to Declan Donnelly as he took to the stage – alone.

Tonight’s show marks a landmark in TV history, as well as the careers of Dec and his co-star Ant McPartlin.

It’s the first time that one of them has hosted a show without the other.

Ant is back in rehab, following his very publicised car accident and subsequent drink-drive charge earlier this month.

Dec and ITV took the decision for him to host the final two episodes of their Saturday prime-time favourite alone.

Some 10 minutes into the live show, Ant’s name had not been mentioned – with Dec only alluding to his absence by commenting about having double the workload this week.

Many viewers picked up on this, and also Dec seeming pretty nervous – but who could blame him?!

It’s clear he’s nervous but he’s doing so well! It feels very quiet though without the banter #saturdaynighttakeaway

Everyone watching Dec nail it on his own tonight #SaturdayNightTakeaway pic.twitter.com/R84dptFN8z

I respect Dec so much for doing #SaturdayNightTakeaway on his own! I bet he’s so nervous bless him! *hugs* @antanddec

He and the show kept viewers abreast of rehearsals for the show, ahead of it going live.

All rehearsals done, your #SaturdayNightTakeaway will be ready in an hour! See you on the telly at 7pm. D x 📺

The official social media accounts shared a picture of this week’s music guests, The Script…

Well done so far, Dec, everyone’s rooting for you through the rest of the show!

How do you think Dec is doing? Leave us a comment on our Facebook page @EntertainmentDailyFix  and let us know what you think!