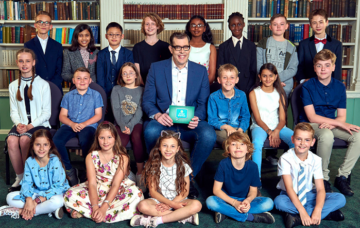 Child Genius is back, testing children on their general knowledge in a bid to find the UK’s brightest 8 to 12 year old.

But while the kids who feature in the C4 series are certainly remarkable, it’s the “pushy parents” who are fast becoming notorious.

Read more: The Chase’s Mark Labbett – aka The Beast – called out for making embarrassing spelling blunder

Fans have been increasingly appalled at some of the behaviour shown by the mums and dads – especially calling out the behaviour of two mums who appear to favour their sons while “ignoring” their daughters.

One of the 19 talented children taking part in the contest is William, whose mum Claire Oliver-Harwood is understandably proud of the boy… However, viewers believe it’s at the expense of her daughter.

Scenes show the tiger mum praising her boy to the moon and back, while her eldest daughter looked undeniable awkward in the background.

Claire gave up her job as a biologist to dedicate her time to helping her son achieve his (or her) goals, by studying his textbooks and teaching him the information as he ‘hates reading’.

While Claire insists she’s not competitive “in a pushy psycho kind of way”, viewers flocked to social media to disagree with her as she appeared to totally ignore her other child.

Talking to the camera, Claire said: “I think he did brilliant. He’s fabulous, aren’t you, Will? He’s my son and I absolutely adore him. I mean look at him! He’s beautiful.”

One viewer really felt for the daughter, saying: “William’s mother is saying how much she loves her son, and the daughter looked like she wanted the floor to open up and consume her.”

Another said: “Not sure if you’ve noticed, but while you’re fawning over your son, you’ve got a daughter standing behind who seems to have been forgotten about #ChildGenius.”

A third said: “William’s mum is creeping me out, her poor daughter.”

“William’s mum has been busy,” blasted another. “Knocking every ounce of confidence out of her daughter whilst raising an insufferable [bleep] of a son at the same time must be tough. #ChildGenius.”

Somebody should tell Williams mum she has a daughter too, poor kid #ChildGenius

Not sure if you've noticed, but while you're fawning over your son, you've got a daughter standing behind who seems to have been forgotten about #ChildGenius pic.twitter.com/jItvU2cbqK

#ChildGenius William's mother is saying how much she loves her son, and the daughter looked like she wanted the floor to open up and consume her!

God, William’s mum is unsettling and creepy. God knows what will happen if he ever dares to get a girlfriend. Her poor daughter… #ChildGenius

These mums (Michael & William) have a somewhat unhealthy relationship with their boys. It's just creepy. I feel for the siblings #ChildGenius

William's sister looks like she'd rather eat her own sick than listen to her mum talk about how perfect 'her boyyyy' is, poor girl #ChildGenius

Many others called the mum “creepy” and “shameful”.

And Claire wasn’t the only parent to enrage the viewers, as Kaja also appeared to favour one child over her other.

Twin siblings Melissa and Michael both took part in the competition, however, the girl quit after scoring just one correct answer in the spelling round.

With Michael still in the game, Kaja and the dejected sister Melissa were seen in the audience.

But viewers were horrified, when the TV camera panned on mum Kaja who told her daughter to “get off me” when she attempted to lie her head on her mum’s shoulder.

One upset viewer tweeted: “Wow that poor little girl, her face when her mum says get off me. #ChildGenius.”

Another blasted: “Two mums who clearly favour their sons over their daughters… What is wrong with people? You have two kids each ‘ladies’, and they’re BOTH amazing… Remember that  #ChildGenius.”

Wow that poor little girl, her face when her mum says get off me 😢 #ChildGenius pic.twitter.com/KDVorAUx6o

2 mums who clearly favour their sons over their daughters… what is wrong with people? 😑 you have 2 kids each 'ladies', and they're BOTH amazing… remember that 👊 #ChildGenius

I thought it would be the kids that would annoy me on #ChildGenius Nope it’s the parents. Particularly Michael’s Mum. #pushyparent

Meanwhile, one wrote: “I thought it would be the kids that would annoy me on #ChildGenius. Nope it’s the parents. Particularly Michael’s mum.”

Tonight (Thursday 28 February), the contest reaches the quarter-final stage and the remaining 11 children must demonstrate an extraordinary range of knowledge about some of the world’s most complex scientific principles in order to get through to the semi-final on Friday night.

What do you think about the parents in Child Genius? Leave us a comment on our Facebook page @EntertainmentDailyFix and let us know what you think!