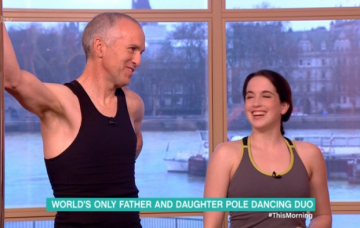 They're in pole position

This Morning has really kicked off the new year with a bang!

With Holly and Phil still on their extended Christmas break, Eamonn Holmes and Ruth Langsford have been filling in.

And today they presented a segment that will be tough to top for uniqueness throughout the rest of the year – and it’s only January second!

David and Hazel Roberts are, to the best of their knowledge, the world’s only father-and-daughter pole dancing duo.

Eamonn asked the two of them who started doing it first, and David replied that he had first become interested after being inspired by other male dancers.

He added: “There was a girlfriend I was going with at the time who pestered me for three weeks to go with her, and I relented in the end.”

Hazel then mentioned that she’d begun dancing while at university, having no idea her dad was also into it.

She said she’d sent him a video of a move he’d learned, to which he replied he already knew it.

At that point, David’s instructor suggested it would be a good idea for the two of them to pair up and compete together.

Hazel said of their early performances: “I had a bit of stage fright but it’s good to share the stage with someone. I wouldn’t trust anyone else not to drop me!”

Eamonn and Ruth then invited the duo to get up on the studio’s pole to show their stuff.

They launched into a complicated routine which left viewers at home scratching their heads – and some rubbing their eyes in disbelief.

One wrote: “Genuinely THE most awkward thing I’ve EVER seen. Help me.”

And another commented: “Nothing you say is going to make me think that pole dancing with your Dad is okay.” 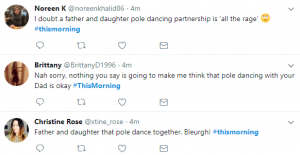 However, some viewers praised the pair, with one writing: “Pole dancing is hard and great exercise & fair play they are both keeping fit and being dedicated, but can’t help think a dad and daughter combo seems a little weird.”

Another was only critical of Hazel’s form, not the act itself, writing: “She needs to hold per poses for longer, it all just looked messy – so much amazing potential though.”

Now there’s something we definitely would like to watch.