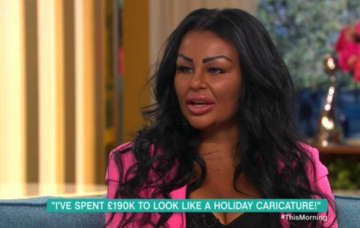 She spent £190K on plastic surgery

This Morning viewers were left gobsmacked during Thursday’s show after a woman revealed she has her nipples tattooed into a heart shape.

Hosts Phillip Schofield and Holly Willoughby met Krystina Butel, a woman who has spent £190K on plastic surgery to look like a holiday caricature.

Krystina’s dream of transforming her look started after she had her caricature drawn during a holiday in Ibiza when she was 15.

Krystina, from Wakefield, had her first boob job when she was 17, going from a D to a 34 FF, and has since undergone a string of other procedures.

Revealing why her dream is to look like a caricature, Krystina said: “This is always what I found an attractive woman.

“I’ve always been a true follower of what I wish to do and what I want to look like. I never follow trends or certain ways of looking.”

Krystina said she started her transformation by dying her hair more blonde and getting spray tans.

But she started to make more permanent changes to her body and has spent £23,000 on boobs jobs alone.

Krystina also had a gastric band on the NHS after hitting 24 stone.

“Firstly having a gastric band on the NHS was something I chose to disclose,” she explained. “The next thing is when I’ve had it done, I’ve not lied about it.

“If I had a drink drugs or alcohol problem the NHS would cater for me. I had a food action. I was in ill health, I was 24 stone.”

Holly asked Krystina: “But did you want to lose weight for health benefits or so you could see the breast implants were larger?”

“When I get on a plane and my bum won’t fit in the seat and I had to have an extended belt, they were the problems,” Krystina replied.

But these weren’t the only procedures Krystina underwent.

She revealed she has also had a designer vagina, or what Phil called a designer “vajayjay,” and then had her nipples tattooed into hearts.

As a photo was shown of Krystina’s nipples, Phil said: “But the caricature doesn’t have those.”

“I thought why not? It was the added bling, I have had them now for a number of years,” Krystina said. “They might be gone when I get my next boob job, I might chop them off.”

Viewers watching from home were left shocked by Krystina’s pimped nipples and some even criticized the show for showing the photo on daytime TV.

One person tweeted: “How is it OK for them to show a close-up of a woman’s nipples mid morning?” while another said: “So you can’t show breasts on TV….even if it’s a woman breastfeeding….but slap on a novelty tattoo and it’s OK!!!??”

Others just couldn’t get over Krystina’s new look.