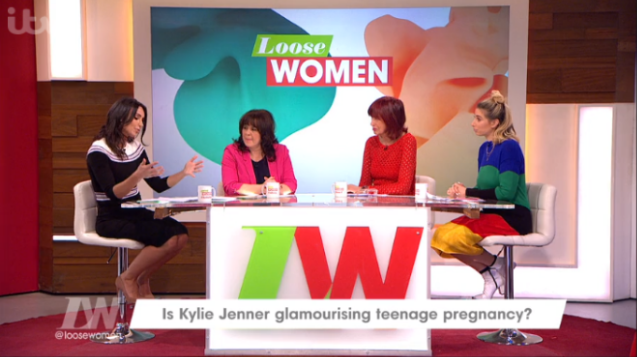 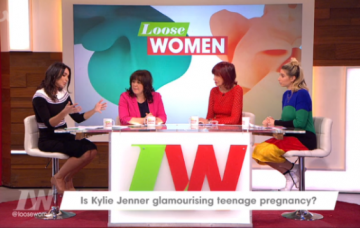 They had to remind them of the Kardashian star's age...

The surprise birth of Kylie Jenner’s baby has been a hot topic after she managed to keep her pregnancy secret for months.

With their finger on the pulse of breaking news, the Loose Women panel naturally decided to discuss the subject on Wednesday’s show.

But their viewers were quick to point out to the show that they’d made a massive mistake – as Kylie is 20 so she isn’t a teenager!

A large number of fans of the show took to Twitter to tell them they’d got it wrong.

One wrote: “@Loosewomen But Kylie Jenner is not a teenager she’s a 20 year old woman so how is she glamorising teen pregnancy?”

A third baffled viewer wrote: “I’m confused how is Kylie a bad role model. She got pregnant but I don’t see how she is a teenager. She’s 20 years old. It’s not like she’s 16 and promoting under age sex like I don’t get it #loosewomen.”

Others pointed out that the debate was silly anyway, saying a reality TV star couldn’t be held responsible for someone’s teen having a baby of their own.

One viewer who made this point said: “Yes, she’s in the spotlight. She’s living her life. She’s not telling you to go out and get pregnant. If your child wants to have a child because of this, then you’ve failed as a parent.” 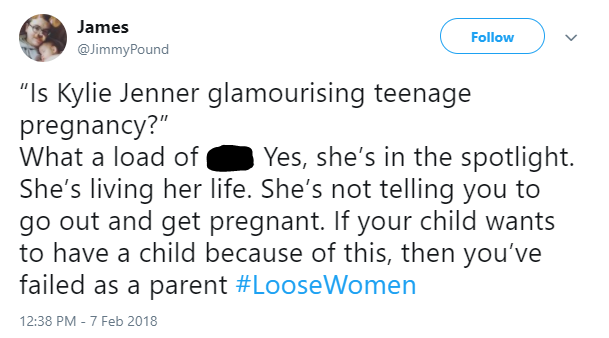 However, others argued that the show technically hadn’t made a blunder, as Kylie only turned 20 last August. So she would have been a teenager when she conceived with partner Travis Scott.

For this reason, Coleen argued on Loose Women that Kylie should be mindful of her young fans.

She said with reference to her 16-year-old daughter who is “obsessed” with the Kardashians: “It’s worrying, at a certain age I do think they are very influenced and ‘I want to be a Kardashian’. One of my sons said to be yesterday, ‘is this going to glamorise it for girls Ciara’s age?'”

Christine agreed it was a concern, saying her 12-year-old stepdaughter with her footballer husband Frank, “adores” the Kardashians.

Mother-of-two Stacey, who had her eldest son when she was 19, disagreed.

She said: “I have a lot more faith in the younger generation to be headstrong and to make their own decisions. I actually think it’s cooler to have children later on in life nowadays.”

She added: “I think the younger generation know the consequences of having a baby and how much it will change their lives.”

Sticking to the stats, Janet agreed saying: “The birth rate among teenagers has gone down so I don’t think one reality TV star having a baby is going to result in a rash of teen pregnancies.”

She added: “I personally think they are appalling role models but young girls today are so smart, and I know your daughter and step-daughter think she’s fabulous but the majority of young girls I’m sure just laugh at her.”

What do you make of the Loose Women debate? Leave us a comment on our Facebook page @EntertainmentDailyFix and let us know what you think!