Can you see a resemblance?

Hunter Owen arrived in EastEnders last night and the charismatic teenager was an immediate hit with the viewers!

Fans have been falling over themselves to comment on the newcomer’s arrival on social media and let’s just say those heart-eyes emojis are getting a LOT of use!

Hunter landed in the Square when Ciara came to claim the money Sharon stole in the heist. Ciara brought him with her – and Mel was very pleased to see her son.

Louise immediately showed Hunter round Walford, taking him to his dad’s “old haunts”.

But it soon became apparent that Mel hadn’t been entirely honest with her son about what his dad was like.

Hunter thought Steve had been a hero, and that he’d died from a heart attack in the club.

But mean Ciara revealed Steve was a “thug” and that he’d died in a burning car, having stolen a baby (baby Louise, in fact). She didn’t mention that he’d taken Lou because her mum, Lisa – Mel’s best mate – had asked her to!

And that wasn’t all. Ciara went on to reveal that Steve had killed his ex, Saskia Duncan – much to Hunter’s horror.

But while Mel wasn’t enjoying Hunter’s visit to the Square, the fans LOVED it!

“Hunter from EastEnders is quite beautiful to look at,” gushed one viewer. “Wow Hunter,” said another. 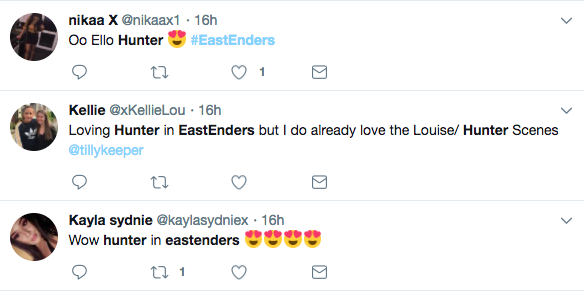 “The guy who plays Hunger is cute as,” said another smitten fan.

And others noticed a resemblance between Mr Owen and another former teen heartthrob – Jamie Mitchell.

“Is it just me or does Hunter look like the old Jamie” asked one sharp-eyed fan. 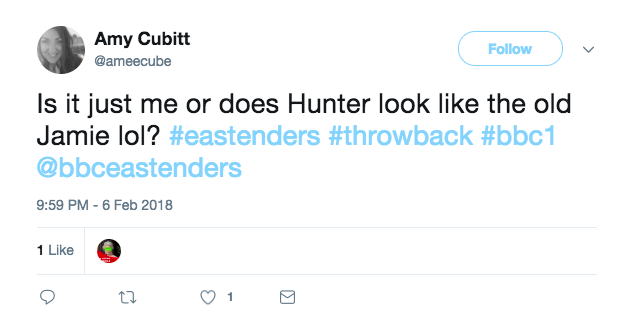 With so much love for the newcomer, we reckon he’ll be sticking around for a while longer!

Does Hunter Owen remind you of Jamie Mitchell? Leave us a comment on our Facebook page @EntertainmentDailyFix and let us know what you think!