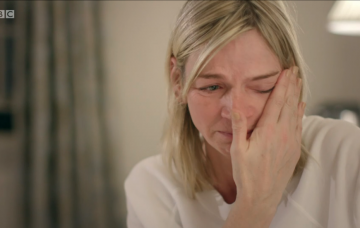 Zoe Ball revealed her late boyfriend blew her a kiss goodbye as she opened up about the last time she saw him alive.

Wiping tears from her eyes, Zoe told how she wished she had reassured Billy she would always be there to help make his future brighter, however she could.

She said: “It was just that moment and that feeling of: ‘Oh my God, I love him so much, we’ll find some help and it will all be okay.’

And although the Radio 2 DJ wanted to let Billy know just how much she cared for him, she was thankful for the opportunity to receive a farewell of sorts – even if she didn’t know that was what it was at the time.

Zoe recalled of their final moments together: “He got on his bike and he cycled off and he turned round and he blew me a kiss goodbye, and that was the last time I saw him.

“And I feel really grateful that I got my goodbye in a way. And I think that was my goodbye.”

The documentary showed Zoe taking on the arduous challenge of cycling 350 miles from her birthplace of Blackpool to her hometown of Brighton in five days to raise money for Sport Relief in honour of her “beautiful boy”.

The mum-of-two raised more than £500,000 by completing the challenge – spurred on by celebrity pals such as Fearne Cotton and John Bishop – beating injury and adverse weather conditions as the Beast from the East storm swept across the UK.

And before the trip she also visited several mental health organisations in a bid to understand why suicide is the biggest killer of men in the UK under 45.

After meeting a man who had attempted to take his life due to depression, she said: “It’s so hard to comprehend what depression or a mental illness feels like if you haven’t suffered.”

Zoe recently told The Mirror that talking to sufferers and support workers left her feeling “personally stronger and with a clearer sense of practical help that really can make a difference to people struggling with depression, anxiety, bereavement or even considering the most final action of ending their life”.

And relating what she discovered during filming back to her own circumstances, Zoe continued: “It’s that thing that maybe I was so busy trying to find a solution, or find a therapist, or look for help here, or ‘let’s do this’… when perhaps maybe the most powerful thing I could have done is to sit and listen.”

Viewers, overcome with emotion, flooded Twitter with thousands up thousands of well wishes and messages of support, as well as their own personal experiences of how their lives have been blighted by depression and suicide.

@ZoeTheBall Have just blubbed my way through your wonderful prog from last night. You Wonderful Person. I hope you raise lots more money and you find some inner peace. Much love xxxx

Zoe Ball you are one courageous and strong lady. #sportrelief #hardestroadhome #courage #determination