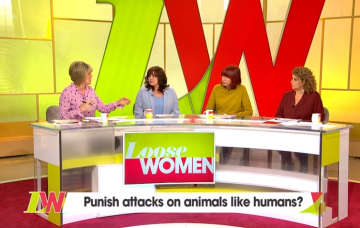 Loose Women viewers were left in tears on Tuesday after the show interviewed Lyn Prewer, whose cat was the victim of a cruel acid attack.

Lyn appeared on the programme via Skype from a veterinary surgery, to talk about how horrified she was when rescue cat Georgie returned home with acid burns all over her face and ears.

Sitting alongside Georgie, who was asleep in her bed, Lyn told the panellists that the attack “sickened” her.

Speaking about the person or people who threw the acid over Georgie, Lyn said: “I’m sickened by it all.”

“I would like them to come over and see what they’ve done to my cat and speak to my children and the devastating effect it has had on everybody,” she continued.

“Georgie has been through the most traumatic, painful experience, and I would like them to come and have a good look at what they’ve done and have a proper [prison] sentence.”

“This is wicked, what is the next step for someone who is capable of doing this?” she added.

Talking about how Georgie is recovering from the attack, Lyn said she’s “hanging in there.”

“Yesterday, she managed to eat the first bowl of food which she’s had for over a week now,” Lyn revealed.

“That was an encouraging sign for us because the day before that, she was looking pretty miserable and we were wondering whether we were doing the right thing for her by trying to save her.”

“She’s lying here with me now,” she added. “You can’t hear her but she’s actually purring.”

“We’re so pleased,” said Loose Women anchor Ruth Langsford. “I know a lot of kind people have been donating because the vets’ bills are extraordinarily expensive for you.”

“We here at Loose Women also would like to contribute a thousand pounds towards that,” added Ruth, leaving Lyn very emotional. “We wish Georgie a very speedy recovery.”

Viewers watching from home were left in tears over Lyn and Georgie’s heartbreaking story.

One person wrote on Twitter: “That poor cat on Loose Women. Can’t believe people can be so cruel.”

“I’m tearing up here, how can anyone throw acid at an innocent cat?” another wrote. “I really hope Georgie the cat gets better soon.”

Others expressed their outrage over the attack.

Shortly after speaking to Lyn, the panellists discussed whether attacking an animal should carry the same punishment as attacking a human.

“Absolutely in my opinion,” Coleen Nolan said. “If you have that mindset, that you can do something like that to any animal, torture it, watch it in pain, then you have no empathy for anything living.”

Nadia Sawalha agreed but gave a different view on the matter.

“The emotional reaction is yes – but on a practical level, we haven’t got enough room in prison for people that do this to humans,” she said.