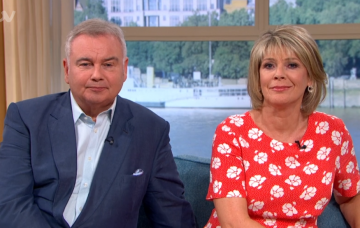 Viewers thought they were hilarious

We’ve seen a series of stand-in presenters taking up residence on This Morning’s sofas over the past few Fridays – but these two might be the best so far.

And viewers were in stitches watching the pair giggle their way through.

One wrote: “Crying laughing at Gok & Rochelle this morning. Can we keep them? 🤞🤞🤞”.

Another added: “Loving this morning with Gok & Rochelle brilliant team thanks for brightening my day ❤️”.

A third tweeted: “@thismorning I’m loving Rochelle and gok on this morning, it’s like their two mates having a right laugh, their really making me giggle 😂 #thenewphillandholly ❤️”.

Others even suggested replacing the full-time presenters with these two.

A fan commented: “Im so loving gok and Rochelle presenting.. get rid of holly and Phil and have these 2 as main presenters and watch the ratings blossom..”

But many sitting at home were a little less impressed with fashion expert Gok’s choice of shirt.

“Gok. What is that shirt this morning”, wrote one viewer.

Someone else added: “Gok wan dresses like he’s going to watch a Beach Boys gig #ThisMorning”.

One fan defended him though, writing: “Gok Wan is wearing the most MAGNIFICENT shirt on this morning”.

The pair repeatedly got the giggles as they talked about weeing on jellyfish stings, finding Gok a granddad, and Gok falling in love with chef Phil Vickery.

Not all the replacement presenters have been so popular.

The reason? Nothing to do with their presenting skills, it was all down to their surnames.

One Smart Alec commented on Twitter: “Um were this pairing intentional? Ball and cox or cox and ball.”

Another said: “I never thought I would see the day when Cox and Ball would present.”

A third wrote: “Um were this pairing intentional? Ball and cox or cox and ball.” [sic]

Much as we love you, Ruth and Eamonn, maybe it’s time This Morning mixed up their presenters on a more regular basis…

What did you think of Gok and Rochelle? Leave us a comment on our Facebook page @EntertainmentDailyFix and let us know what you think.