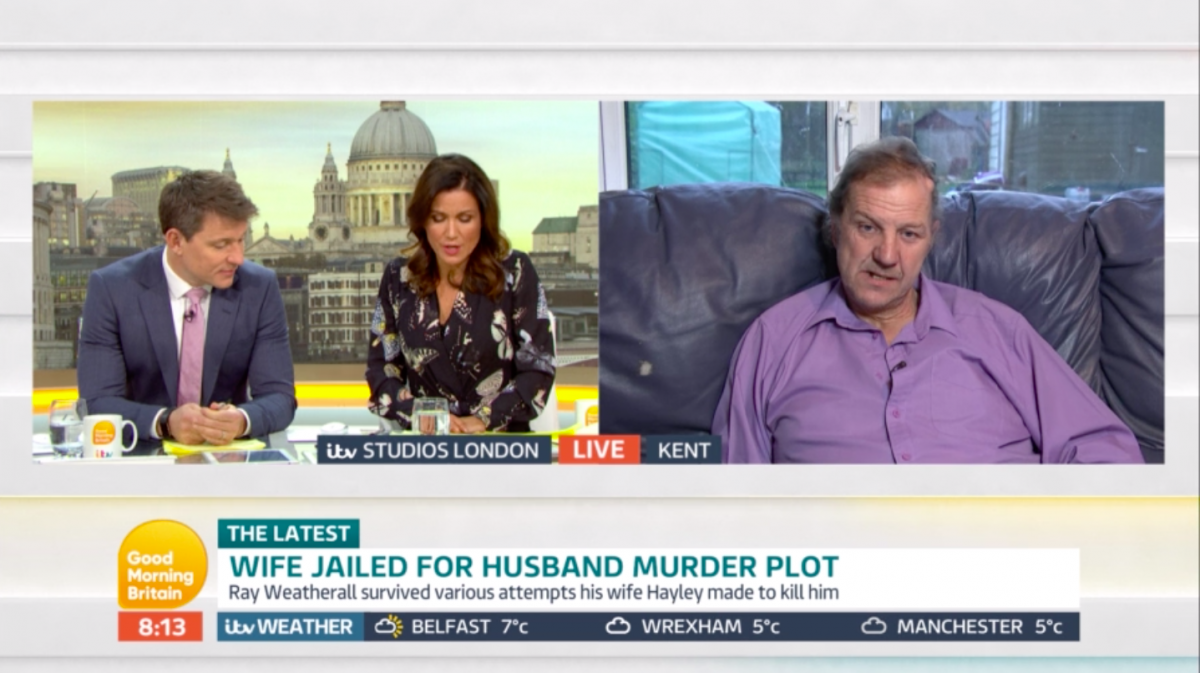 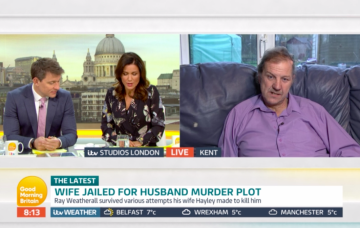 His wife will serve a minimum of 17 years

Good Morning Britain has shocked viewers before, but an interview on Thursday morning’s show has truly blown fans away.

Presenters Susanna Reid and Ben Shephard spoke to Ray Weatherall, who insisted he still loved his wife – despite her trying to murder him THREE times, with the help of her secret lover.

Susanna, 47, introduced the segment by calling the story “absolutely extraordinary,” as it was revealed how Hayley Weatherall plotted the death of her terminally ill husband, alongside her lover Glenn Pollard and Glenn’s daughter Heather.

The three of them plotted three times to murder him in six months, which included an insulin overdose and shooting him in the face. All failed, and his wife Hayley was given a life sentence along with her co-conspirators.

Asked how he felt about it, Ray said: “I’m disgusted with Glenn and his daughter. Glenn was most certainly the driver of it all.”

Speaking from his home in Kent, Ray said he had no idea they were planning anything, as they’d always had a “stable loving relationship… we’d never had any issues whatsoever.”

Ray said: “I still don’t really understand how she got involved with it all.”

He added that he didn’t believe she was as involved in his attempted murder as the others, saying: “She’d always been a loving wife, really good mother… so no, I don’t think she’s as bad as she’s being made out to be. She never actually done anything.”

Susanna read out the judges’ comments from the court case, which described Hayley as acting with, “cold, calculated, chilling cruelty”.

Ray insisted that changed nothing for him, revealing: “I would much love her to come home, but I know she’s not going to. Most certainly not in my lifetime, so I’ve just got to deal with the future.”

Susanna asked: “Ray, do you still love your wife?” and he replied emphatically: “Yes, most definitely.”

Ben, 43, asked: “Have you visited her in prison?” And Ray confirmed: “Yes, I have already visited her, last weekend.”

Dad-of-two Ben added: “Has she shown any remorse, Ray, has she talked about it at all?”

Sounding resigned, he replied: “Yeah, she just apologised for what she got herself tangled up in. And there’s not much we can do about it now, she’s locked up and that’s it. So all I can do is continue to keep visiting her and take the children to visit her.”

Susanna suggested that his terminal diagnosis could be involved in his decision to forgive her, and Ray admitted that it “could be part and parcel of how I feel”.

He said: “She knows how I feel. And she’s telling me she still loves me and she would love to be back home with her husband and her children.”

Ben told him his forgiveness was “remarkable” as the presenters thanked him for sharing his story.

Good Morning Britain shared a clip of the interview on Twitter, explaining: “Ray Weatherall says he still loves his wife, despite the fact that she and her lover tried to kill him three times.”

Ray Weatherall says he still loves his wife, despite the fact that she and her lover tried to kill him three times. pic.twitter.com/9RicBFoHcm

Viewers were shocked, with one tweeting: “Muppet!!🙄,” as another commented: “This bloke just can’t take a hint.”

Others defended Ray, saying: “Let’s respect his thoughts and wishes.” Another tweeted: “Credit to him for not being so hateful.”

A third added: “Kudos to the man for not being filled with hate.”

Can you understand this man’s feelings? Leave us a comment on our Facebook page @EntertainmentDailyFix and let us know what you think.