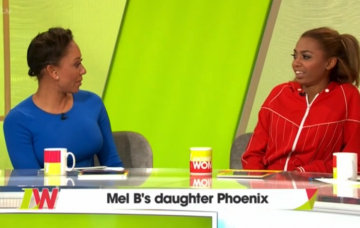 The 19-year-old, who was sporting a pair of Mel’s ripped jeans on the show, revealed she wanted to give her mum a makeover to make her less provocative.

But Phoenix had a little fun with her mum’s makeover and seemed to dress her mum like Sandy from Grease.

The pair headed off for the transformation and when they returned Mel was left shocked by her new look.

She was wearing a floral skirt, a white top and a white cardigan over her shoulders.

Mel paired the look with pink retro shades and a pair of white heels.

As the audience burst into laughter, Mel quipped: “I mean, really? I’m like Sandy out of Grease!”

“I can’t even walk in these shoes!” she added, while posing in her outfit. “This feels so uncomfortable. I look like I’m doing proper fancy dress and I’ve been caught in the wrong time zone.”

Explaining her inspiration behind her mum’s look, Phoenix said: “Imagine your taking Maddie [Mel’s other daughter] to school and you’re going to her dance recital or something.”

“I think it’s really cute and adorable,” she added, laughing.

Continuing to wind her mum up, Phoenix said: “If I was in charge she would look so cool right now.”

“Basically, you did this for a laugh?” Mel replied, as Phoenix said: “Yeah.”

Meanwhile on the show, the Spice Girl revealed Phoenix helped her deliver her six-year-old daughter, Madison, when she was just 13-years-old.

“Do you remember, you actually helped me give birth to Madison?” Mel asked her daughter.

“Yeah I don’t forget that, trust me,” Phoenix quipped. “It was beautiful in a way.”

“Yeah that was beautiful,” Phoenix said. “That I take to my heart until the day I die.”

Later on in the show, Mel and Phoenix opened up about what they love about each other.

“I am so proud of you for being a boss,” Phoenix said.

Gushing about her daughter, Mel said: “I’m so proud of you for just being you. You’re 19-years-old and you’ve turned into a very humble, respectful lady.”

“You support your friends and they always come to you for advice and help,” she continued. “I think that’s beautiful.”

What did you think of Mel’s makeover? Let us know by leaving us a comment on our Facebook page @EntertainmentDailyFix!