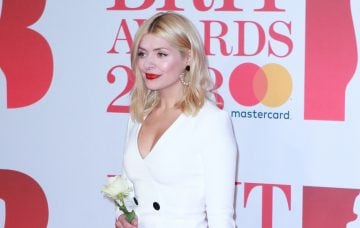 Will they make it to work?!

Holly Willoughby and Phillip Schofield were among the stars at Wednesday night’s glamorous BRIT Awards in London.

And it seems like they were having a VERY merry time!

After Dua Lipa’s performance, the camera panned to Holly and Phil in the audience, with host Jack Whitehall joking: “Look, these two are already wasted! Pace yourselves!”

It left viewers giggling and with one major question: will the pair be hungover on Thursday’s episode of This Morning? 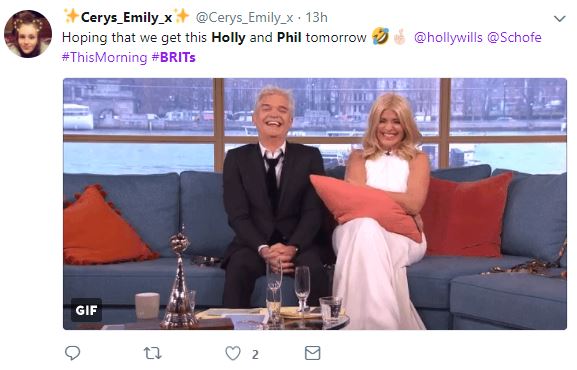 Others pleaded with Holly and Phil to let them come along on their next big night out!

Holly arrived on the red carpet solo, while Phil was accompanied by his wife, Stephanie.

While there, they all met up with pals including Dermot O’Leary and Keith Lemon, who joined Holly for a selfie.

Phil, meanwhile, got stuck into the red wine!

But perhaps realising Thursday would be a struggle, before he went to bed he shared a snap of his BRITs wristband with the caption: “Tomorrow is going to be… challenging.”

It seems like This Morning viewers hoping for a hungover Holly and Phil may get their wish.

Well, as far as Phil is concerned, anyway!

Waking up bright and early on Thursday morning, he shared a snap of his head with the simple caption: “Ow!”

As for Holly, there’s no word yet on how she’s feeling, though she was seen heading to a BRITs after-party with husband Dan Baldwin, suggesting she may have had a late night too.

Do you find hungover Holly and Phil funny? Leave us a comment on our Facebook page @EntertainmentDailyFix and let us know what you think!