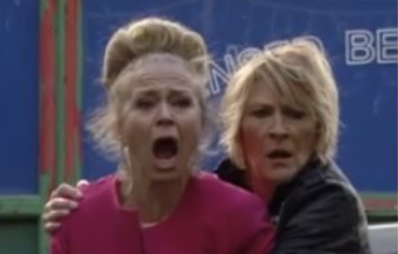 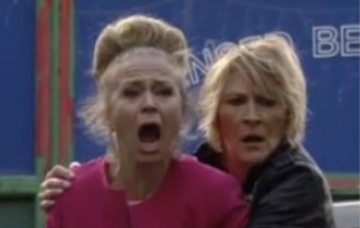 EastEnders viewers were left fearing for Mick Carter’s life after he was apparently gunned down in dramatic scenes in the New Year’s Day episode.

As the gunman opened fire, Mick (Danny Dyer) seemed to fall backwards as if he had been shot.

Wife Linda and mum Shirley looked on in horror, with his missus releasing a blood-curdling scream.

Fans are now worried that the Queen Vic landlord might have been killed, and have been posting messages online insisting: “Mick cannot die.”

One upset viewer wrote on Twitter: “I’ve actually just been sitting there crying because mick got shot.”

“If Mick has been killed then I’m gonna kick off!!!!” tweeted one person.

“If they’ve killed off Mick Carter I’m not watching #EastEnders ever again,” said another.

The gripping scene also sparked speculation about the shooter.

Others thought the man with the gun might have been Mick’s son.

But one dubious fan pointed out: “I don’t think it was micks son coz he would probably of said ‘son’ in a shocked way.”

EastEnders continues tonight, when hopefully viewers will get answers to a few other questions about the heist…

Why was the robbery carried out in broad daylight in front of numerous witnesses?

Why was Aidan not in disguise?