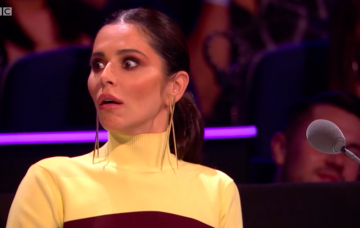 Many are still confused about her as a judge

Cheryl’s long-awaited return to mainstream TV finally happened on Saturday night – and it has divided fans.

The Greatest Dancer pulled in nearly 5million viewers but not everyone enjoyed the new BBC show. In fact, some blasted the talent show as “awful” and “a terrible programme,” with many picking on Cheryl particularly.

The debut episode saw the in-studio audience vote for dance acts, with those receiving 75% going through to the next stage, where they will be mentored by the three coaches.

But many were unimpressed with Cheryl as part of the line up, with one tweeting: “Watching The Greatest Dancer… what the hell is Cheryl Cole doing on it as a judge?? Liking the show but how can they justify that? #thegreatestdancer.”

Others complained about the show generally, with one writing: “#thegreatestdancer Saturday night telly is dire just now. This is just awful. Only thing noteworthy is Cheryl’s chopstick earrings 😂.”

A second said: “This is absolutely [bleep] #thegreatestdancer The whole format is awful and has the shelf life of a Cheryl Tweedy marriage vow.”

A third added: “This is awful tv, audience voted for this bloke dad dancing to Cheryl and they didn’t vote a professional contemporary dance. #GreatestDancer.” While a fourth moaned: “The Greatest Dancer is a terrible programme.”

Many, though, were much more positive about the new show – and its biggest star. One gushed: “You showed true emotion on The Greatest Dancer. Go Cheryl!”

Another said: “Yesterday was the greatest dancer and the episode was perfect I was so excited to see the episode.”

A third added: “Cheryl u r amazing on the greatest dancer I love u.” While a fourth tweeted: “Wow I can’t believe how good the Greatest Dancer was it wass amazingggggggggg!!!!!! Probably the best dance show I’ve ever seen and that’s not just cause I love Cheryl ( maybe a lil) but still.”

Viewers also voted with their remote control – with more tuning in to ITV, to catch the first episode of The Voice.

Loved it or hated it, The Greatest Dancer made for compelling viewing. Did you catch Andrew’s story? SO GOOD.

What did you think of the new show? Leave us a comment on our Facebook page @EntertainmentDailyFix and let us know what you think.