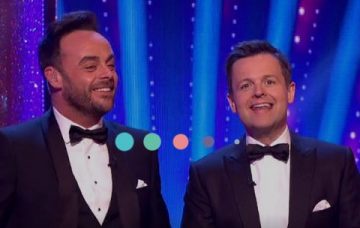 Does it really matter?

Saturday Night Takeaway viewers have accused the show of ‘fixing’ a challenge to ensure the two participants won.

On this week’s episode, roving reporter Scarlett Moffatt tracked down a couple at their local pub in Nottinghamshire.

She told them to get back home immediately if they wanted the chance to win a luxury holiday.

They had to find four ‘boarding passes’ in their home to win the prize.

Some eagle-eyed viewers, however, spotted that the woman found a ‘boarding pass’ in the slime pit and handed it to Scarlett.

Scarlett then appeared to dunk the envelope back in the gunge, before pulling it out and handing it to the man, as if it was a newly-found ‘boarding pass’.

Naturally, it caused a bit of confusion, with viewers taking to Twitter to question what they’d just seen!

Some were convinced Scarlett gave the couple a helping hand…

Others, however, didn’t see anything from with ‘helping’ the couple find the ticket, if that’s what happened.

After all, we all WANTED them to win, didn’t we?

And, as one fan pointed out, perhaps the producers were running out of time, they knew a ‘pass’ was in the pool, and the trio would find it if they had more time.

However, some viewers thought they’d sussed it all out – the couple had FOUR tickets when the woman won her ticket in the slime pit.

They found one in the living room and two in the kitchen, so the fourth was the one found by the woman!

So when Scarlett seemed to dunk it under the slime and hand it to the man, it didn’t matter, as the couple had won already!

It also seemed as if the woman dropped the tickets the couple had already won, which could mean Scarlett was simply fishing out an already won ticket and NOT doing anything wrong.

Whatever happened, it didn’t take away from the fact it was one seriously entertaining challenge!

To mark the show’s 100th episode, producers went all out with the task, filling the couple’s home with all sorts of hilarious surprises.

Opening the front door, they discovered their living room filled with so many plastic balls they basically had to swim through them.

The kitchen, meanwhile, was plastered in Ant & Dec wallpaper.

And out in the garden, the whole patio had been taken over with a huge slime-filled pool complete with water slide and inflatables.

Scarlett hasn’t responded to any of the ‘fix’ tweets, but she did send a message after the show to thank everyone for their support.

She tweeted: “Thanks so much for all your amazing tweets about Saturday night take away. Happy 100th show & to Susan and mark again you deserve the world, see you in Florida you lovely people!!”

ED! has contacted a Saturday Night Takeaway rep for comment.