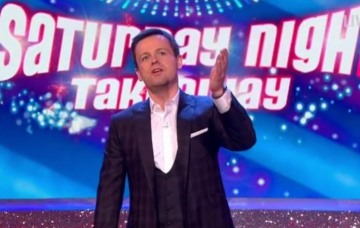 Overwhelming support from the show's fans...

Dec came (alone), he hosted, he conquered – this was the overwhelming conclusion of viewers tuning into tonight’s Saturday Night Takeaway.

Declan Donnelly flew solo for the first time in his presenting career, as his co-star and best buddy Ant McPartlin takes time out from TV life to sort out his personal issues.

The Geordie star – who this week confirmed the happy news he is set to become a dad for the first time – understandably appeared a little nervous as he took to the stage.

Fans tuning him were quick to spot it, and sent him their support via social media…

#SaturdayNightTakeaway @antanddec ….. Dec looking so nervous but doing brilliantly u got this

Watching #SaturdayNightTakeaway & really feel for dec.he is obviously nervous but is doing so well #dec

There had been speculation about how the ITV show would address Ant’s obvious absence; it opted for the humour route.

Rather than delivering a heartfelt speech about his friend – which would have jarred with the whole tone of the upbeat programme – Dec instead made a couple of jokes about being landed with twice the workload this week.

This went down a treat with the audience…

atleast they can joke about it and ant would expect nothing less. #SaturdayNightTakeaway

Whether Dec took a read of all the support on social media during the ad breaks, or just naturally relaxed into his groove, the telly pro was soon smashing the show.

By the end of the episode, Takeaway fans admitted it had been a strange experience without Ant, but they couldn’t praise Dec highly enough…

So strange watching #SaturdayNightTakeaway without Ant. But Dec is doing amazing @antanddec xx

Are you excited for next week’s finale now? Leave us a comment on our Facebook page @EntertainmentDailyFix  and let us know what you think!