Sainsbury's is the latest to launch its Christmas ad, and the supermarket has gone for a decidedly Dickensian feel.

But it hasn't impressed viewers, with some calling it 'scary' and 'dreary'.

The supermarket is celebrating its 150th birthday this year and has made its Christmas advert into a festive fable set in 1869.

It tells the story of a young orphan chimney sweep - Nicholas - who is caught picking up an orange from outside the very first Sainsbury's store.

Wrongly accused of stealing the orange, he's banished into the snowy wilderness.

But wait! He's soon rescued by Mary Ann Sainsbury, who gives him a big bag of oranges and tells the mite: "If you can’t do something special for someone at Christmas, then when can you?"

Nicholas then goes back into the town and leaves an orange in each of his fellow orphans' stockings.

If you can’t do something special for someone at Christmas, then when can you?

We then see him pull over a red cloak and red hat, implying that Nicholas and Father Christmas are one and the same.

Although the advert has fantastic production values and tells a wholesome story, not everyone was touched by it.

What a dreary @sainsburys advert this is.

Apparently I'm one of those only seeing it through a "political prism" or perhaps I'm a Russian bot.

Whatever, it's dull and not at all in the spirit. https://t.co/VcT5c0pgoW

I don't know why but I find the Sainsbury's Christmas advert really annoying. Maybe it's too twee and try hard? A message of what? Are they giving away free food to the poor this year? No? Then it's insincere too #sainsburys #Christmas https://t.co/If5ouLOxR5 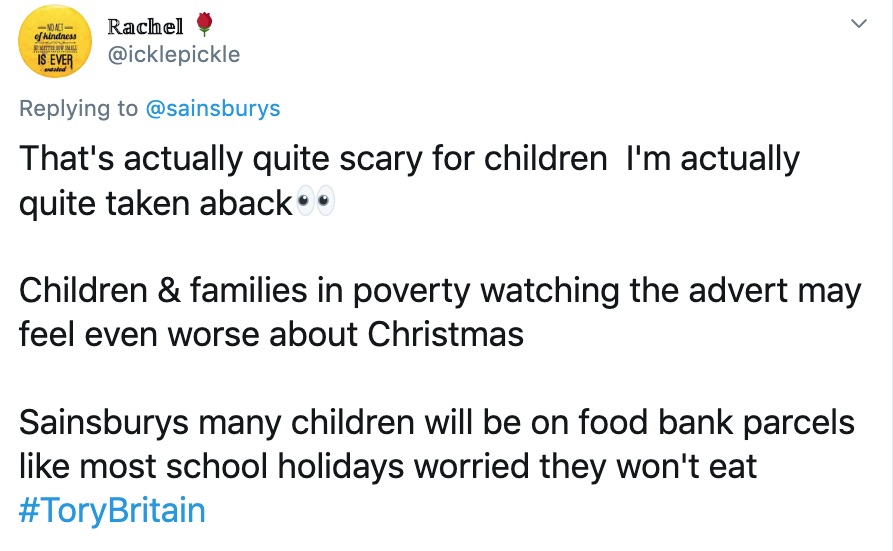 One viewer wrote: "What a dreary @sainsburys advert this is."

"That's actually quite scary for children," another said.