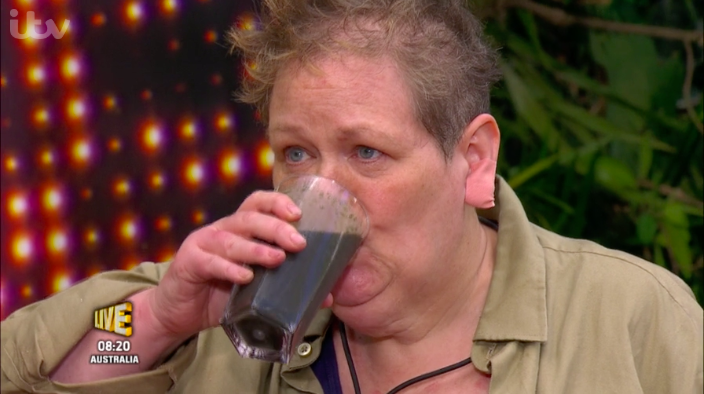 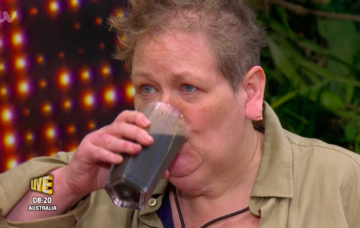 Whatever that drink was, it didn't look too pleasant

She might’ve missed out on a few trials for medical reasons, but on Sunday night, Anne Hegerty proved her I’m A Celebrity… Get Me Out of Here! doubters wrong, breaking records in the X Factor challenge.

Except many fans called fix on the achievement, accusing producers of replacing the fish eyes Anne had to drink, with a tasty glass of Coca Cola.

Anne, 60, took part in the live Bushtucker trial, which first saw her – along with several of her campmates – eating grubs.

The group nailed it, and moved on to the next trial, where Anne, Noel Edmonds, Emily Atack and Harry Redknapp each had to down something horrid in 30 seconds.

But when it came to The Chase star’s drink, viewers were suspicious.

Anne was told she had to drink blended fish guts, but viewers thought it looked like a fizzy drink. Anne finished it off in 12 seconds flat, commenting: “That wasn’t too bad actually.”

As the presenters, Declan Donnelly and Holly Willoughby congratulated her – with Dec commenting that it was a “record-breaking time” – Anne repeated: “It was less awful than it sounded.”

Fans watching at home flocked to Twitter to comment: “If you look closely was @anne_hegerty drinking coke cola? It looked a fizzy drink.”

Another furiously speculated: “This is what I am saying, she is drinking coke cola it was a fizzy drink what @anne_hegerty was drinking. The show is a fix. @imacelebrity #imacelebrity.”

A third asked presenters: “Is it true, they’re saying @anne_hegerty was drinking coke on her trial, are you mugging us all off again?”

Many more insisted it was just “a fizzy drink,” while others suggested it had at least been watered down, tweeting: “90% coke 10% fish guts…”

Another joked: “We spotted that Anne had to drink a glass of Coco Cola on last nights #ImACeleb live trial too – I could do that faster, particularly if it was Diet Pepsi.”

The stars of the show were oblivious to the controversy, with Holly proudly asking the contestant: “Anne, did you surprise yourself there?”

She replied: “I was rather nauseated by the eating trials, but yeah I got em down – got ’em both down.”

Lots more, though, rushed to cheer on Anne, who has Asperger’s Syndrome.

One wrote: “Very well done to Anne last night in the live trial. It didn’t look like coke, it looked awful.”

Another added: “Idiots think Anne Hegerty downed a glass of coke. Are you blind and thick?”

A third tweeted: “Anne Hegerty was brilliant tonight, as someone who is on the spectrum I definitely relate to her #ImACeleb #welldoneAnne.”

The TV star has won fans with her hilariously relatable comments and her amusement over the other campmates’ exercise obsession.

The I’m A Celebrity Instagram account shared a funny moment on the show, where Anne watched some of the group do press ups, and commented wryly: “I can’t even do one of those, I can’t even do a half of that.”

Do you think it was coke or fish guts? Leave us a comment on our Facebook page @EntertainmentDailyFix and let us know what you think.