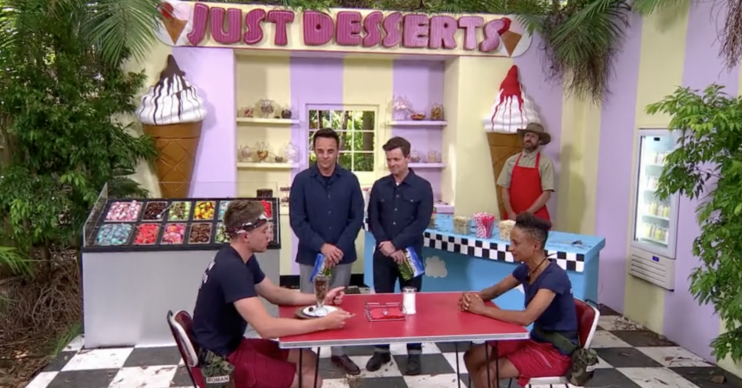 Viewers have called the I’m A Celebrity eating trial – which saw Roman Kemp and Adele Roberts eat an assortment of bugs and body parts – “boring”.

The infamous trial was a little tamer than usual this year after bosses revealed that contestants wouldn’t eat live creepy crawlies as it was seen as cruel.

And, although Roman and Adele took home ten stars from Ant and Dec‘s Just Desserts trial, viewers were less than impressed.

Read more: Kate Garraway once kept a sex spreadsheet and did the deed every day

Eating trial is boring now….same every year – wasted screen time if you ask me.

After they tucked into a cow’s teat, vomit fruit, a pig’s uterus and a sundae of cockroaches and mealworms, viewers said the segment was “dull”.

And, despite the shake up, one said it was “the same every year”.

Eating trial is boring now….same every year 🤷‍♀️ wasted screen time if you ask me; I’d rather see the friendships forming than watch the trials tbh #ImACeleb

Others blamed the “snowflake” generation and said the trial was boring because the celebs weren’t eating live bugs.

@imacelebrity #ImACeleb honestly these snowflakes out here ruining all the fun and banning the live insects from being eaten🙄. There are literally millions of them bred for the show no harm in eating them alive but the boring vegans of the world had to step in and ruin the fun😂

While some didn’t hold back when it came to the stars taking part in the trial, blaming Roman and Adele for being boring.

#ImACeleb Even this eating trial is boring. So bloody boring Celebs

There were some Just Desserts fans, though.

The eating trials are so disgusting 🤢 but make great viewing 📺👀👍🏻

Other said they’d like to turn the tables on the show’s hosts and get them to do the eating trial.

Can there just be an episode one year where @antanddec do an eating trial??!! Imagine 🤪 #ImACeleb

In other food news, hunger was clearly getting the better of campmate Ian Wright as he snapped at Andrew Maxwell over a crocodile drumstick.

What did you think of the eating trial? Tell us on our Facebook page @EntertainmentDailyFix.