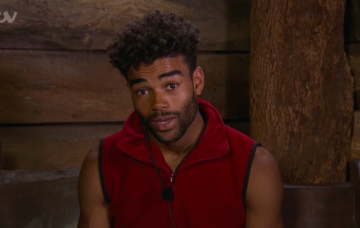 What did he pull out of his pocket?

We do love a conspiracy theory over here, and we’re clearly not alone as I’m A Celebrity… Get me Out of Here! viewers flocked to social media with their latest suspicion.

During Saturday night’s show Hollyoaks’ star Malique Thompson-Dwyer reached into his pocket and appeared to pull out a mobile phone.

Fans were outraged by the apparent rule break, taking to Twitter to write: “Totally looked like Malique got his phone out his pocket? 🤓 #ImACeleb.”

One asked: “Did Malique actually just get his phone out 🧐#imaceleb.”

did malique actually just get his phone out 🧐#imaceleb pic.twitter.com/yeCEbP2kNO

Another added: “Malique deffos just pulled out his phone on #imaceleb Someone’s gonna get [told off] for not editing that out.”

Others wanted an explanation from producers, tweeting: “@imacelebrity @ITV explain this clip of footage. We were told celebs had no link to the outside world in the jungle yet it looks like Malique pulled out a mobile phone from his pants pocket.”

Another viewer commented: “#ImACeleb #Maliquegate Hey guys did Malique really just pull a mobile phone out of his pocket? Disqualification if this is the case?”

The Channel 4 star has admitted in previous episodes that he’s missing his phone, telling his co-stars that he’s usually “always” on it. He added that he’s been enjoying having long conversations with everyone instead.

Contestants are definitely not allowed phones in the jungle but last year, TV presenter Alison Hammond – who was on the series in 2010 – admitted how easy it would be to sneak one in.

She told This Morning: “Do you know, they never checked my bag when I went into the jungle…I could have taken a mobile!

“I packed it [but] I knew there’s no way I’m going to be able to take this phone into the jungle because I thought they’re going to check my bag. I put it in my suitcase, turned it off.”

While fans were confused, insiders at the Sun Online claimed it was “actually a cigarette packet.”

A spokesperson for ITV told The Sun: “Celebrities who smoke are allowed to smoke in camp.”

The 20-year-old actor has been seen smoking in previous episodes, as cigarettes are not considered a luxury item.

But many fans weren’t buying this explanation, with one tweeting: “Very slimline cigarettes then??? And the way he handled the ‘object’, is the same way you would hold a mobile. Not a packet of cigarettes. Just my opinion. What do you think? #imaceleb.”

What do you think Malique was looking at? Leave us a comment on our Facebook page @EntertainmentDailyFix and let us know what you think.