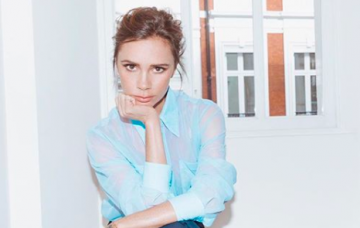 The girl band got our hopes up last month when all five met up and said they were talking about “exploring some incredible new opportunities together”.

But now Mel C has said it’s unlikely they will be performing together this year as the fashion designer and mother-of-four isn’t keen.

Speaking to The Sun at the Prince’s Trust Awards, Sporty Spice said: “Victoria has been quite vocal, it’s really not something she wants to do at this time.”

Previously the band’s manager Simon Fuller had hinted that one of the members was dragging their heels and that the group may have to perform as a four piece.

At the start of February, Victoria, Mel, Emma Bunton and Mel B all reunited at Geri Horner’s home in Hertfordshire.

Victoria, 43, shared a snap of all five of them together for the first time in years with the caption: “Love my girls!!! So many kisses!!! X Exciting x.”

Later that day, the group issued a statement in which they said they were keen to work together again to promote their “girl power” message.

The statement read: “We have enjoyed a wonderful afternoon catching-up and reminiscing about the amazing times we have spent together. We are always overwhelmed at how much interest there is across the whole world for The Spice Girls.

“The time now feels right to explore some incredible new opportunities together. We all agree that there are many exciting possibilities that will once again embrace the original essence of The Spice Girls, while reinforcing our message of female empowerment for future generations.”

Speaking about what these opportunities could be last night, Mel C said it’s unlikely there will be any live performances or a tour.

She also laughed off a suggestion they would be performing at Prince Harry’s wedding to Meghan Markle in May.

Mel C told Press Association: “There’s been quite a lot of press interest there, my invite hasn’t turned up yet. It was all that snow. I think the mail’s been a bit held up in the snow.”

Come on VB, give us what we want, what we really, really want!

Entertainment Daily has contacted Victoria’s representatives for a comment.

Do you want the Spice Girls to perform together as a five-piece again? Or would you be happy to see four of them back on stage? Leave us a comment on our Facebook page @EntertainmentDailyFix and let us know what you think!