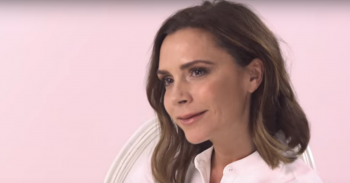 Fashion designer made the surprising revelation in a new interview

Victoria Beckham’s life may seem picture-perfect from the outside, but things aren’t always as easy as they seem.

The fashion designer has given a new interview where she claims to be a “self-diagnosed dyslexic.” But the revelation hasn’t gone down well with all of her fans, some of whom have criticised her for not getting a proper diagnosis before speaking out.

Speaking to the Financial Times, Victoria, 44, explained: “Dyslexia doesn’t run in our family, it gallops.”

Dyslexia can cause problems with reading, writing and spelling. And the former Spice Girl – who will celebrate 20 years of marriage to former footballing husband, David Beckham this summer – hinted that her children could also have the condition.

The 44-year-old is a busy mum to Brooklyn, Romeo, Cruz and Harper, as well as running her fashion empire out of London. The pair have become so successfully, it was recently reported they’ve become BILLIONAIRES!

Fans were divided by VB’s comments, with many angry that she would diagnose herself so publicly.

One scolded her: “Don’t be a misdiagnosed dyslexic. Get diagnosed and use your position to help other children and adults with the condition. Part of the problem for many legitimately diagnosed dyslexics is that many of those who described themselves as ‘undiagnosed’ aren’t dyslexic at all. They just can’t spell. There *is* a difference.

“Dyslexia is because of a neurological issue (the brain processes written communication in a different way) whereas many people who can’t spell just didn’t have a great education or didn’t apply themselves (for whatever reason) at school.”

The comment continued: “Anyway, dyslexics are actually as bright as anyone else, and the world of academia is packed to the rafters with them. A friend of my mother got a First in Law despite being dyslexic and she now runs the law department at a major University.”

Another complained: “Get a proper diagnosis or bore off.” While a third said sarcastically: “Victoria Beckham diagnosing herself as dyslexic is so refreshing. So I’m going to diagnose myself as a [bleeping] idiot. There that feels better. Now the world knows my secret!”

Others suggested she was making the claims for attention, saying: “Keep in the public eye Vic.” Another tweeted: “Must really want some publicity… why tell everyone?”

Many on her Instagram followers rushed to praise the revealing interview though. One commented: “Brava Victoria 👏👏👏.”

A second said: “I don’t understand the Beckham bashing. You’re both good role models, and fine ambassadors! 👏🍀.” While a third told her: “What a fabulous article. Love the headline – more power to you, girl ♥️♥️♥️.”..

What do you think of Victoria’s comments? Leave us a comment on our Facebook page @EntertainmentDailyFix and let us know what you think.