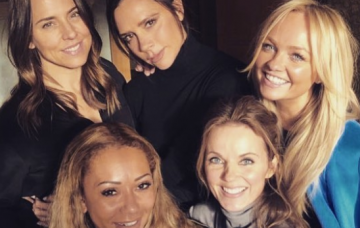 Put your purses away!

We hate to be the bearers of bad news, but don’t shoot the messenger – we just report it as we find it!

Like everyone else on the planet, we were over the moon when the Spice Girls came together to reveal their shock reunion.

And with Geri apparently looking to book Prince Harry and Meghan Markle’s wedding for their first show, we were all geared up for a major tour.

Read more: Holby City favourite is headed to Casualty to sort out the ED!

“I still speak to them all individually, but for us all to get together was really lovely. There’s something so strong in the message of what the Spice Girls stood for.

“What is that in the future? What does that look like? We were just bouncing ideas around. Brainstorming. But this [fashion] is what I do.”

Rumours have included the girls fronting a massive talent show in China, the now-unlikely tour, and even a whole new Spice album.

But beyond saying they were working on “exciting new projects”, there have been scant few details of what exactly will allow us to spice up our lives in 2018.

Victoria’s currently in New York for Fashion Week, and gave fans a hint of the old pop star routines via her social media channels.

On an Instagram story, she shook her bum side-to-side rather like Elvis Presley, ending in a trademark Posh Spice point.

At the end of the clip she said: “Actually maybe this is good”. So perhaps there’s hope of us getting VB on stage after all!

The girl group conquered the world in the late 90s with classic singles including Wannabe, 2 Become 1 and Say You’ll Be There.

They reunited once in 2007 for a lucrative tour, but have been doing solo projects for the last decade.

Riding a wave of ‘Girl Power’ to worldwide fame, they’re the biggest selling girl band in the UK’s history.

Whatever form the reunion takes, we’re here for it – even if it means we need to sneak into Harry and Meghan’s wedding party!