Victoria Beckham has shared a hilarious snap of her son Brooklyn sporting some rather unusual (and rude!) trousers.

The fashion designer took to her Instagram story on Tuesday to show fans Brooklyn's outfit as they continue their family holiday in Croatia.

The photo sees Brooklyn, 19, sitting down as he looks at the camera while sporting a pair of black trousers that have "sex" written on them.

No wonder his mum was cringing! 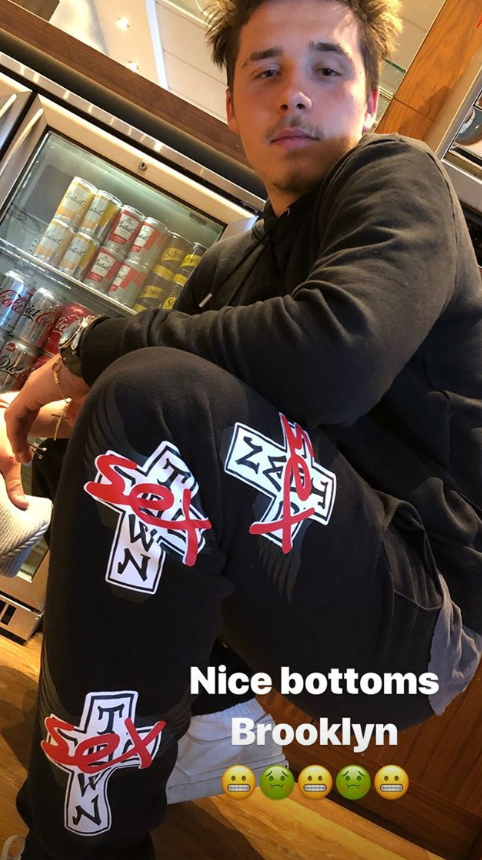 She captioned the photo: "Nice bottoms Brooklyn," followed by a string of sick face emojis.

On Tuesday, the Beckham clan treated fans to a string of photos and videos as they enjoy some quality family time in the sun.

Brooklyn shared a snap to Instagram as he reunited with his family, amid reports he's left his photography course in New York to accept an internship in London.

He posted a sweet photo of himself, his two brothers, Romeo and Cruz, and his seven-year-old sister Harper.

The photo sees the siblings standing on the deck of a boat in front of the water, clad in summer attire.

It's been claimed Brooklyn is back home with his family in London after leaving his photography course at a prestigious New York college.

A source told The Mirror: "He adores his family. In the end it was the lure to come back to them all that swung it - and the prospect of a terrific internship."

For now, the teenager is enjoying time away with his family to relax.

Victoria, her husband David and their four kids have been enjoying a day of water sports and lounging on a boat in the ocean.

Proud mum Victoria shared a series of snaps to social media including one of Harper playing in the water.

Victoria, who appeared to be watching from a distance, was amused by her children's antics as she captioned the clip: "Embarrassing dad slide. No wonder they sailed off and left him!"

What do you think of Brooklyn's 'rude' bottoms? Leave us a comment on our Facebook page @EntertainmentDailyFix and let us know what you think!