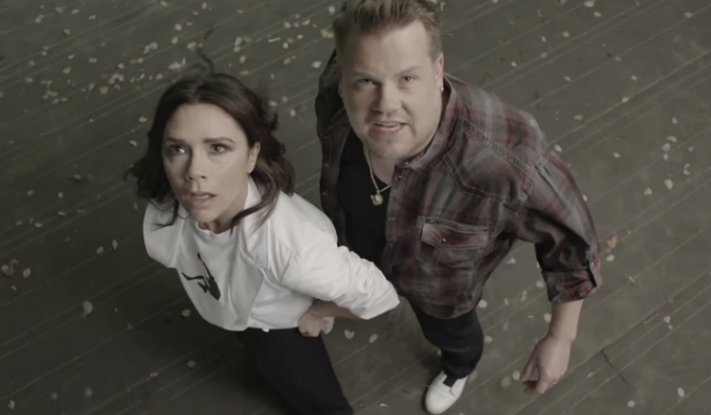 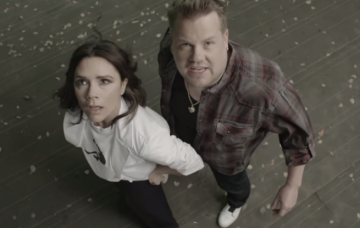 We’re used to seeing her pout for the camera but Victoria Beckham has showed off her funny side in a new sketch with James Corden on his Late, Late Show.

The tongue-in-cheek clip shows the Spice Girl joining former Gavin and Stacey actor James in battling to save LA from a “Shaqnado” – that’s a tornado that’s full of basketball player Shaquille O’Neal, obviously.

In the mock trailer for a disaster movie, Victoria plays “Doctor Poshowitz”, who discovers the city is about to be hit by its worst storm in history.

“What’s wrong?!” she exclaims to James as dark clouds gather above them.

“There’s a tornado and it’s forming over a basketball court,” James dramatically replies.

“What does that mean?” she asks, over-emphasising each word with wild hand gestures.

“It means you have to go home, doctor,” James tells her.

She replies she’s not going anywhere! The pair then save the day by throwing basketballs at the NBA star from a helicopter.

The mother-of-four posted a link to the video on her Instagram account today, writing that she had “so much fun” filming with James and Shaq.

“You could have a 3rd career as a comedic actress!! Such great timing! Love u Dr. Poshowitz!” wrote one.

“Love it!” wrote a third, while a fourth declared: “All of this, was amazing.”

Of course it’s not the first time Victoria has turned her hand to acting, who can forget the 1997 film Spice World?!

Victoria and Shaq appeared on The Late, Late Show earlier this week to promote their recent collaboration for Reebok. The fashion designer has created a collection of athletic wear for the basketball legend.

During her interview, James believed he’d got an exclusive on whether Victoria has been invited to the forthcoming wedding of Prince Harry to Meghan Markle.

Victoria looked visibly awkward and fumbled her words saying in response to the question: “I… I… I don’t know.”

Laughing at her attempt to hide it, James told her: “You’re totally going! Well, how exciting, it will be wonderful.”

Meanwhile, Victoria also celebrated her 44th birthday with her family this week.

She shared a sweet snap on Instagram of her heading out to dinner with her four children, Brooklyn, 19, Romeo, 15, Cruz, 13, and Harper, six.

She wrote: “Birthday eve with my babies x love u so much.”

In another picture, she posed with husband David Beckham in the sunshine, writing: “Love u so so much @davidbeckham x Thank u for making my birthday so special x The perfect day!! All 6 of us together x kisses x.”

She also revealed that when it comes to birthday cake, she prefers the healthy option!

She showed herself cutting a “cake” made from watermelon, strawberries and blueberries as Harper cutely sang Happy Birthday.

What do you think of Victoria’s acting? Leave us a comment on our Facebook page @EntertainmentDailyFix and let us know what you think!