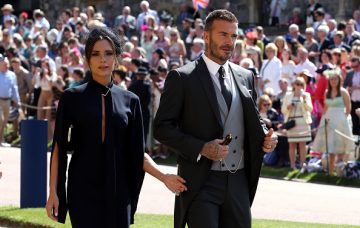 She watched The Duke and Duchess of Sussex marry on Saturday

Victoria Beckham had an amazing day at the royal wedding – despite viewers and commentators commenting on her lack of smiles.

The fashion designer and retired footballer husband David were among the 600 guests who watched Prince Harry tie the knot with former actress Meghan Markle – now The Duchess of Sussex – on Saturday.

Cameras caught Victoria, 44, and David, 43, arriving at Windsor Castle and finding their seats, which led cheeky TV commentators including Phillip Schofield and Dermot O’Leary to joke about Victoria not smiling.

But chatting to the Evening Standard, Victoria said she had the “best day”.

She said: “It was such a beautiful, incredible wedding. It was just the best day. They looked so happy, and everybody was just so happy for them. Meghan seems like a genuinely lovely woman, who really loves him.

Victoria, who wed David in 1999, added she felt “relief” to not be pregnant at this royal wedding, given she was expecting daughter Harper, now six, when The Duke and Duchess of Cambridge wed in 2011.

“Quite honestly, it was such a relief not to be hugely pregnant at this royal wedding that it was a joy to be able to choose anything I wanted to wear,” she said.

The former Spice Girl wore a navy frock from her own fashion collection (obvs!) while husband David looked dapper in his morning suit.

And it wasn’t the couple’s first royal wedding: they also attended the nuptials of Prince William and Kate Middleton at Westminster Abbey back in 2011.

After Harry and Meghan’s big day, Victoria said on Instagram: “Congratulations, an amazing day. So proud to be British! Thank you so much for including @davidbeckham and I. We are so honoured and so happy for you both.”

David added: “What a proud day for our country today! Watching Harry as happy as he was makes us all proud of the man and person he has always been…what a day!”

Meanwhile, plenty of fans have jumped to Victoria’s defence after she was criticised for not smiling more, saying nobody has to walk around with a huge grin on their face all day.

Victoria has previously spoken about feeling self-conscious in public, too.

She told Sunday Times’ Style magazine that she doesn’t enjoy being on red carpets, knowing all eyes are on her.

“I look at pictures of people smiling on the red carpet and they are properly loving it,” she said.

“I just can’t wait to get down the carpet and be done with it. I don’t know if it’s the years of being photographed and the criticism, but I just feel exposed and vulnerable and uncomfortable, and I can’t be myself.”

And she told The Times last year: “I do smile and laugh a lot. Every morning I genuinely wake up and realise how lucky and blessed I am – despite how I often look in pictures!”